[Robert J. Shiller] The Trump narrative and next recession 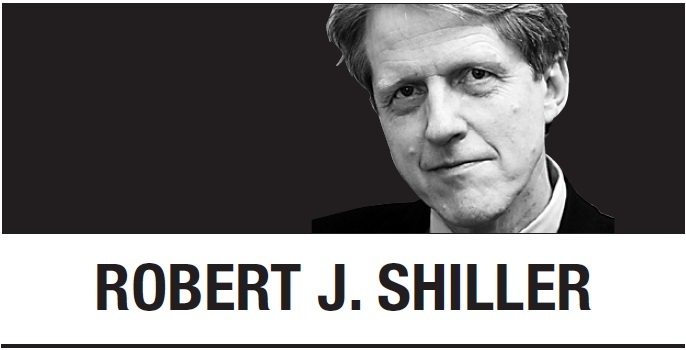 US President Donald Trump concluded his remarks at the recent G-7 summit by inviting the assembled leaders to hold next year’s meeting at his Doral country club near Miami, describing a fantasy-like world of “magnificent buildings” whose “ballrooms are among the biggest in Florida and the best.”

It was yet another instance of Trump’s public narrative, which has been on a rising growth path for nearly a half-century.

One can observe this by searching Trump’s name in digital news sources, like Google Ngrams. His narrative has been slow to grow by contagion, but it has been growing for a long time, such that his domination of public discourse in the United States almost seems implausible.

Part of Trump’s genius has been to pursue for a lifetime the features that have sustained narrative contagion: showcasing glamor, surrounding himself with apparently adoring beautiful women, and maintaining the appearance of vast influence.

Trump had firmly embraced this career strategy by 1983, when an article in the New York Times entitled “The Empire and Ego of Donald Trump” reported that he was already, in that year, “an internationally recognized symbol of New York City as mecca for the world’s superrich.”

Consider his interest in professional wrestling -- a form of entertainment that attracts crowds who by some strange human quirk seem to want to believe in the authenticity of what is obviously staged. He has mastered the industry’s kayfabe style and uses it effectively everywhere to increase his contagion, even going so far as to participate in a fake brawl in 2007.

Trump had the good luck to be invited to host a new reality television show in 2004 called the Apprentice, which featured real-life business competition. He immediately saw the opportunity of a lifetime to advance his public persona, becoming famous for a tough-love narrative. “You’re fired!” he would bark at losers on his show, while also showing some warmth to winners and losers alike.

Now that Trump has established a contagious narrative, he continues to live out his TV show persona. At the Republican Party’s 2016 convention, after portraying the US as a declining power, he declared, “I alone can fix it.” Accordingly, he has fired his top officials at an unprecedented rate, ensuring that no one of independent stature remains part of his administration. This has established a new form of arbitrariness in the US government, the Trump whim, which, given the linkages of the US and global economies, can affect the entire world.

None of this is original. Trump has been pursuing a variation on a recurrent narrative that dates back thousands of years. The ancient cynic Lucian of Samosata, in a second-century essay on oratory, “A Professor of Public Speaking,” describes to would-be leaders how one can exploit a power narrative by acting it out in one’s own life:

“In your private life, be resolved to do anything and everything, to dice, to drink deep, to live high and keep mistresses, or at all events to boast of it even if you do not do it, telling everyone about it and showing notes that purport to be written by women. You must aim to be elegant, you know, and take pains to create the impression that women are devoted to you. This also will be set down to the credit of your rhetoric by the public, who will infer from it that your fame extends even to the women’s quarters.”

For Lucian, this narrative does not describe reality, but creates it. What matters is not substance, but consistency: “Bring with you, then, as the principal thing, ignorance; secondly recklessness, and thereto effrontery and shamelessness. Modesty, respectability, self-restraint, and blushes may be left at home, for they are useless and somewhat of a hindrance to the matter in hand. … If you commit a solecism or a barbarism, let shamelessness be your only remedy.”

Of course, in an era when people usually did not live as long as they do today, Lucian could not have imagined that one could plan to maintain narrative consistency for 50 years. But nor can such a narrative be sustained forever. And the end of confidence in Trump’s narrative is likely to be associated with a recession.

During a recession, people pull back and reassess their views. Consumers spend less, avoiding purchases that can be postponed: a new car, home renovations, and expensive vacations. Businesses spend less on new factories and equipment, and put off hiring. They don’t have to explain their ultimate reasons for doing this. Their gut feelings and emotions can be enough.

So far, with his flashy lifestyle, Trump has been a resounding inspiration to many consumers and investors. The US economy has been exceptionally “strong,” extending the recovery from the great recession that bottomed out just as Barack Obama took over the US presidency in 2009. The subsequent US expansion is the longest on record, going back to the 1850s. Ultimately, a strong narrative is the reason for the US economy’s strength.

But motivational speakers often end up repelling the very people they once inspired. Witness the reactions of students at Trump University, the fraud-based school its namesake founded in 2005, which shut down by multiple lawsuits a half-decade later. Or consider the sudden political demise of US Senator Joe McCarthy in 1954, after he carried his anti-communist rhetoric too far.

There is too much randomness in Trump’s management of the presidency to make persuasive predictions. He will surely try to stick to his public narrative, which has worked so well for so long. But a severe recession may be his undoing. And even before economic catastrophe strikes, the public may begin paying more attention to his aberrations -- and to contagious new counternarratives that crowd out his own.