AR-based Jurassic World to arrive in Seoul this year: SKT

With companies around the world seeking to incorporate 5G network technology with augmented reality contents, South Korea’s leading mobile carrier has come up with an entertaining marketing gimmick to demonstrate the combination’s potential usage in real life.

Korea’s biggest mobile carrier SK Telecom announced Thursday that it will establish an AR-based Jurassic World at some parks in Seoul. The company said it had agreed with the animated dinosaur’s property owner, NBCUniversal, to release the service by the end of this year.

According to SKT officials, the use of hyperspeed 5G network can help bring the universe of dinosaur blockbuster film “Jurassic World” back to life “seamlessly.” Complicated AR-based images -- such as the huge dinos -- can be delivered to users with much less latency than the previous 4G Long Term Evolution network. 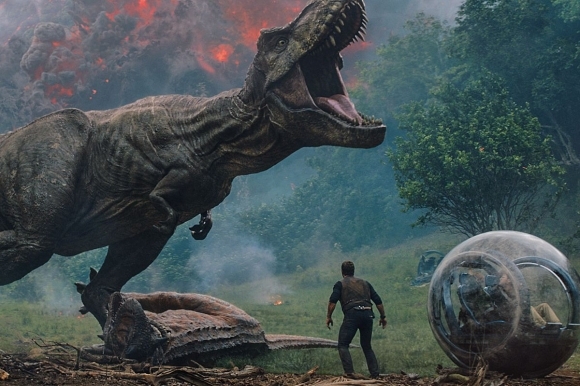 “It would be like looking after a really big pet in your house,” SKT Executive Vice President Yoo Young-sang, who leads the company’s mobile telecommunications division, said at a press conference in Seoul.

Overlaying gigantic monsters onto a live view of the real world is part of SKT’s efforts to boost 5G popularity among general consumers, who have questioned 5G’s technological potential since its groundbreaking launch for commercial service in April.

To bring more advanced contents using the 5G network, SKT also said it would launch game streaming via cloud computing by the end of this year. The company said it is working on a field test to deliver a better user experience compared to 4G, or LTE.

Speculation has been rampant that SKT is working with Microsoft to introduce a cloud-based game streaming service at home and overseas. In May, the two companies signed an agreement for a “joint innovation program” on futuristic technologies such as cloud computing and artificial intelligence.