Part 2 of tvN drama ends; Part 3 to air in September

Two-thirds of the series has aired so far, leaving six episodes for fans to look forward to. Those episodes will air in September, after the new drama “Hotel Del Luna” finishes its run.

The unusual schedule gave rise to rumors that tvN might be thinking of extending the drama for a second season. But as of now, the broadcasting station is saying “nothing has been decided.” 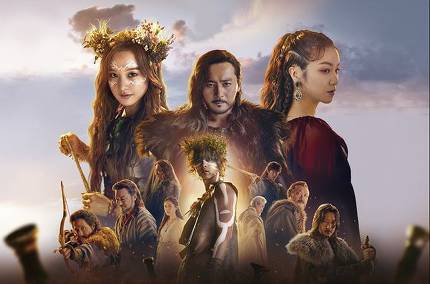 Despite an ambitious beginning, not to mention a reported 54 billion won ($45.7 million) production budget, ratings have failed to meet market expectations.

The series kicked off with 5.8 percent average viewership rating for the first episode, and the latest episode marked 6.8 percent. The peak was 7.7 percent for the fourth episode.

Considering that “Arthdal Chronicles” was one of the most promising productions created by entertainment mogul CJ ENM this year, with the largest production budget ever for the broadcasting station, these numbers are disappointing.

“Mister Sunshine,” another tvN drama that aired in 2018, ended at 18.1 percent. The production budget reportedly totaled 40 billion won. In 2016, one of the biggest hits created by tvN, “Goblin: The Great and Lonely God,” ended at 20.5 percent.

Even apart from the numbers, “Arthdal Chronicles” has been the subject of controversy.

The series was troubled from the beginning, with some staff members accusing production company Studio Dragon of breaching the Labor Standards Act. The case is currently under investigation.

The teaser clips evoked skepticism from viewers, as various elements of the show resembled the hit HBO drama “Game of Thrones” -- from the characters’ outfits to the storyline and other details.

But viewers also noticed scenes that reminded them of the films “Apocalypse” and “Avatar” or the British-American-Italian TV drama “Rome.”

Further, the historical setting left many viewers bewildered. Though the drama is supposedly set in the Bronze Age (based on an assumed timeline for the Korean Peninsula), the soldiers wear metal armor and some use stone axes. The jewelry worn by actress Kim Ok-bin looks far too sophisticated to have been made in the Bronze Age.

Apart from the controversies, however, the storyline itself is intriguing, and the setting is one that no Korean drama has yet touched upon.

More than just depicting the protagonists’ struggle for power, the story asks why some tribes developed into nations and others did not. It challenges the meaning of a tribe, an alliance and a nation.

While Tagon’s (Jang Dong-gun’s) tribe has formed alliances with other tribes and is developing fast, Eunseom’s (Song Joong-ki’s) is small and weak. Seeing the civilization that the alliance of tribes has achieved, Eunseom’s tribe is bewildered.

Also, the show touches on the subject of religion. In the drama, religion is a key factor that the rulers use to control the people. Tagon even says, “It doesn’t matter what the god says, how the priest delivers the saying matters more.”

The people of Eunseom’s tribe, the Wahan, are denied human dignity, kept as slaves and considered lower than animals. Though the Wahan and the Arthdal originate from the same bloodline, the Arthdal people consider the Wahan people primitive based on their lifestyle. Because of this degrading treatment, one tribe member kills himself in front of Eunseom.

The conflict structure asks viewers what defines people as humans, and also poses the question: Can we really say that one culture is better than another?

In the 12th episode, Tanya (Kim Ji-won) proved her sacred bloodline, finding the long-lost bells of the Arthdal. Eunseom has finally escaped from the jewel-digging ore. Part 3, titled “Arth, Prelude to All the Legends,” is to finally reveal who will take the throne and be the most powerful person among the Arthdal.