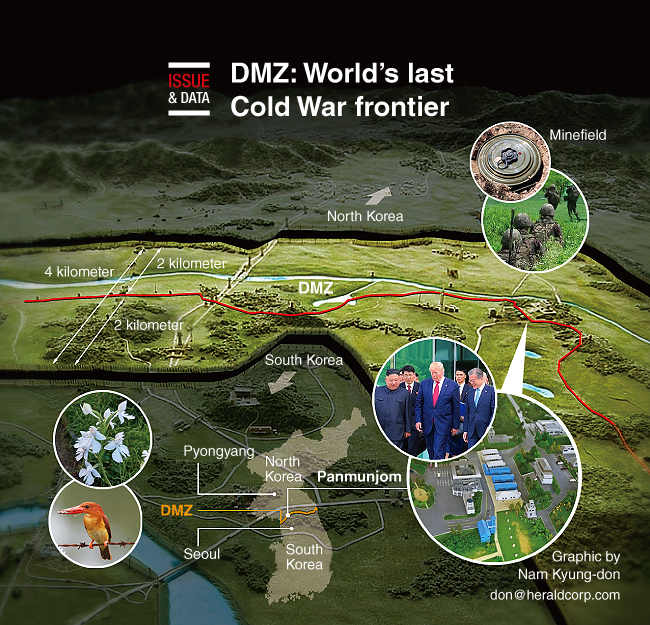 The 4-kilometer-wide DMZ runs for 250 kilometers across the Korean Peninsula, around 50 kilometers north of Seoul and 200 kilometers south of Pyongyang.
At its center is the Military Demarcation Line, where the front line was located when the cease-fire stopping Korean War hostilities was signed in 1953. Under the agreement, both sides agreed to pull back their forces 2,000 meters.

A barrier separating North and South Korea, heavy weaponry is banned within the DMZ. Patrols are allowed but cannot cross the MDL, and no more than 1,000 people from each side are permitted inside the zone at any one time. The DMZ is also littered with minefields.

With the DMZ a “no man’s land” and minimal human presence for more than half a century, much of the zone itself is lush forest, renowned as an ecological refuge for rare species of flora and fauna whose habitat elsewhere has been destroyed by development.

After the Korean War ended in a truce in 1953, Panmunjom was designated as the one place where officials from both sides could meet. It is also the world’s last Cold War frontier where soldiers from both sides come face to face.
Also known as the Joint Security Area, Panmunjom is a series of buildings centered on several blue UN meeting huts right on the MDL, which have become emblematic for the division of the Koreas.
It is the only place in the DMZ where soldiers from South and North Korea stand face-to-face. (AFP)