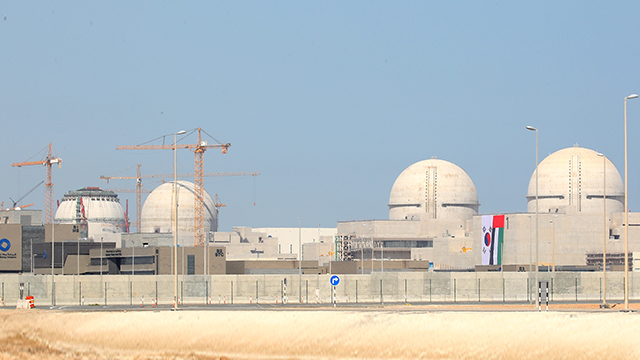 Initially, it was expected that the consortium -- KHNP and Kepco KPS -- would be responsible for long-term maintenance of the nuclear plant, lasting 10 to 15 years. Late last year, the operator Nawah Energy sought bids for maintenance of the plant.

Following a months-long bidding competition with two other bidders, UK-based Doosan Babcock and US firm Allied Power, the Korean consortium won the deal on Sunday.

Under the contract, they will provide maintenance services, supporting the routine and outage maintenance activities of the four APR1400 units of the Barakah plant under the leadership of Nawah.

Despite winning the bid, the scope of work fell below expectations.

Most importantly, the name of the agreement changed from a long-term maintenance agreement to a long term maintenance services agreement. The change means Nawah will be responsible for the entire maintenance of the nuclear power plant while the consortium will provide necessary services only -- as one of the multiple partners.

Nawha said in a statement the name of the agreement was changed for the company to “retain leadership of the maintenance work of the Barakah units.”

Nawha said the term is extendable upon agreement by both parties. As for the value of contract, which was initially expected to be around 2 trillion won ($1.7 billion) to 3 trillion won, it was not indicated as “this will be calculated based on the future task orders issued by Nawah.”

Nuclear experts say Korea’s anti-nuclear policies may have affected the decision for the disappointing deal.

“It is understandable that the UAE may want to increase its own capacity to run the nuclear power plant. But, they must have reviewed -- to some extent --- Korea’s policies of increasingly pulling out of the nuclear industry,” said Kim Hak-noh, a former chief of private-run Korean Nuclear Society.

Korea aims to completely phase out nuclear power plants by 2082 as part of its nuclear-free plan to raise the proportion of renewable energy.

“Nawah’s selection of multiple partners means other nations may also participate in the maintenance. After the five-year contract period, Korea can be excluded if its nuclear competitiveness is deemed to be lower,” said Joo Han-kyu, a professor at Seoul National University’s nuclear engineering college.

However, Nawah denied the speculation. “Decision-making process to select maintenance partners is unrelated to Korea’s nuclear policy,” it noted.