By Korea Herald
Published : Apr 21, 2019 - 17:28       Updated : Apr 21, 2019 - 18:05
A few months back, I witnessed a massive strike by Korea’s taxi drivers’ union. They were protesting the planned rollout of a ride-hailing application by a technology company. Admirable as their cause was, their fight was an exercise in futility that eventually came to a head when the chief of the taxi drivers’ union immolated himself. In response, the government placed a moratorium on the rollout of the service, another exercise in futility. 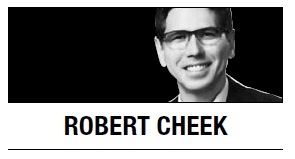 In my experience, Koreans are often quick to respond to perceived instances of social injustice. To me, the taxi drivers’ strike appeared to be the first in a coming wave of social unrest caused by the relentless march of technology -- a different kind of Korean Wave that’ll soon reach the shores of other countries. For the ultimate goal of many technologies is to -- as we say in robotics -- remove the human from the loop. Ride-hailing platforms such as Uber are developing autonomous vehicle programs, aka “robotaxis.” This is the natural progression to make these businesses profitable and attractive for investors.

It’s easy to understand the fear and concern as to how our children will fare when work is increasingly carried out by intelligent machines. The marriage of AI and robotics is giving rise to technological and social changes on an unprecedented scale. Ensuring that the world is one in which succeeding generations can benefit from the proliferation of intelligent machines is an ongoing debate. Questions arise on how to avoid a society controlled by a shrinking oligarchy, while even middle class professions are carried out by intelligent machines -- leaving most in a shattered economic state with little hope for improvement.

“Will there be work for the unemployed?” “How can we ensure that people have enough to eat and places to live?” or “What kind of job can I recommend my children pursue, so they can prosper or even survive in a world where machines are replacing humans in an ever-increasing number of tasks?” are typical questions. However, asking questions within a scarcity economics framework is akin to asking how to best patch holes more quickly on a rotting wooden ship. More important than patching the holes to maintain the current course is finding a way to pilot the ship as quickly as possible to a safe harbor to sustain the journey we call the human experience.


Death throes of a dying worldview

Around the world, reactionary voices grow louder; these are the voices of the frightened, the desperate and the confused. Their anxieties are fueled by the same types who always emerge to fan the flames of fear in their quest for power. The narrative that comes in lockstep with these types is of how they can make the world better, “back to the way it was” or “the way that it should be.”

This is our current predicament, and it’s critical to develop solutions before it’s too late. We must stop looking to the past for answers to tomorrow’s challenges. Rather, we should take a lesson from Zen, examine what we’re doing now, understand the changes that are happening now, and do what we can now to tilt the odds in humanity’s favor. Looking to the past for answers is a ticket to a dystopian future as there’s no benchmark to draw on for the transformation that’s taking place.

Our system of trade is predicated on resource scarcity. Its roots are from when humans, as a simplified example, lived on opposite sides of a geographical barrier (i.e. mountain) and would engage in the bartering of respectively scarce goods. The barter system evolved into the use of a medium of exchange such as gold. The rulers typically tried to control the gold supply. This transformed into the fiat-based money system. Ultimately, however, barter, metallic and fiat currency are all based on scarcity. Such systems worked well, and still do, for now. Today, however, wealth is created from energy, and that, along with the evolution of intelligent autonomous machines and the migration toward renewable energy sources, creates a need to plan for a new society. What should be done in a world of boundless abundance, with intelligent autonomous machines carrying out most ‘value-creating’ work?

The more sinister possibility of where we’re heading can be seen in the deployments of security robots in San Francisco -- a city with the dubious honor of having a community of homeless working professionals due to astronomically high real estate prices -- where they were used to terrorize and chase away the homeless, treating their predicament as a crime rather than a growing social issue that needs to be addressed.

How can resources be allocated in an age of abundance with intelligent machines? Answers typically range from the libertarian view of letting the economy run its course to the implementation of universal basic income. Unlike authoritarian regimes which are installing Orwellian social systems, Western policymakers, particularly those of the US, are moving too slowly to prepare. Think about how quickly mobile phones and free communications proliferated robotics and AI is expanding exponentially faster than any other technology. This is due to two reasons: first, funding is on par with the space race; second, the technologies being developed are using the very same technologies to compound development. We’re at a point where we don’t understand what’s going on inside of many AI systems.

Most of the proposed solutions for social safety nets to cope with tech-driven mass unemployment are fundamentally flawed. An age of mass abundance demands new solutions if we’re to avoid mass suffering. In our current economic model, wealth is technically a construct of the mind and based on an agreement between agents of its inherent value. When few agents are functioning and the majority of the points in a system do not, then the model is broken. It’s time to begin developing systems to ensure that humanity benefits from the age of intelligent machines.