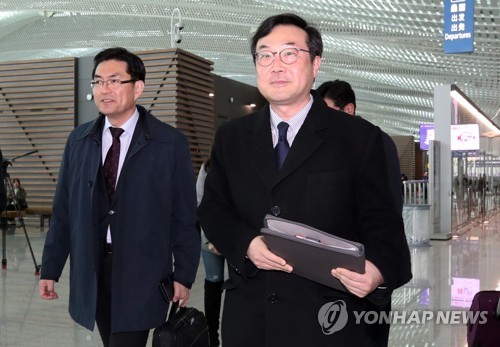 "The two sides shared the need for the international community to keep the momentum for dialogue following the second summit between the United States and North Korea and to make efforts for real progress for (North Korea's) denuclearization," the ministry said in a statement.

"They also agreed to seek close coordination with the international community including the US," it added.

Lee also held a briefing behind closed doors over the current situation on the Korean Peninsula and the government's North Korea policy at the EU Political and Security Committee.

The nuke envoy stressed the need for Washington and Pyongyang to resume their dialogue as soon as possible following the breakdown of last month's summit between their leaders in Hanoi.

He called for the EU's constructive role in achieving complete denuclearization of the peninsula and establishing permanent peace.

His trip came amid growing concerns about the future of the fragile denuclearization and peace-building process as the US-North Korea summit ended without any agreement in February.

The ministry added that Lee will meet Helga Schmid, secretary general of the European External Action Service, on Thursday to discuss the North Korea issue. (Yonhap)