The photographer’s journey tracing the nation’s traditional porcelains spans some three decades. “One day, I came across with this picture of a Korean moon jar and a foreigner sitting right next to it. I wondered how such a beautiful Korean moon jar had traveled such a long distance,” Koo said during a press conference at Kukje Gallery’s exhibition space in Busan.

Koo later found out that it was a portrait of British potter Lucie Rie, dressed all in white, sitting next to a large-sized Korean moon jar.

British potter Bernard Leach, who was staying in Japan to work with Yanagi Muneyoshi, a pioneer of the folk craft movement in Japan, bought the moon jar at an antique shop in Seoul in 1935.

Leach brought the jar back to his atelier in central London. He later sent the piece to Rie’s workshop in the outskirts of London, as the Germans bombed the city during World War II. Upon Rie’s death, the moon jar was bequeathed to Janet Leach, and the British Museum acquired it from her estate in 1999.

In 2006, Koo visited the museum to take photographs of Korean ceramics, including the moon jar that had been owned by the two acclaimed British potters.

Since 1989, the year he encountered the portrait of Rie with the Korean moon jar, Koo has traveled to institutions around the world, taking photographs of dispersed traditional craftworks. The institutions include the Guimet Museum in Paris, the Museum of Oriental Ceramics in Osaka, the Metropolitan Museum of Art in New York, the British Museum in London and the Asian Art Museum of San Francisco. Koo’s “Vessels” series is one of the results of the long journey.

The latest exhibition at Kukje Gallery’s Busan branch comprises some 30 works, including the white porcelain series “Vessels,” as well as his recent series of blue-and-white porcelains.

“I started my ‘Blue-and-white Porcelain Jar’ series to show that they are stylistically different from those produced in China and Japan. The blue-and white-porcelains of Joseon are less exquisite in its expression, yet more austere and humorous,” Koo said.

When taking photographs of Korean porcelains, Koo tries to frame them in ways that reveal their characteristics naturally.

The porcelains stand against backdrops with soft and warm colors, which do not interfere with the subject matter. They are also portrayed against backgrounds that have lines, adding a sense of time and space -- similar to those that can be found in Giorgio Morandi’s still life paintings.

A certain part of the porcelains is well-defined, while the rest of them are slightly out of focus, too. In addition, the light has not been directly projected onto the objects but on the space encapsulating the objects.

The overall mise-en-scene of Koo’s works is subtly poetic. His images of porcelains seem to float, rather than appearing firmly fixed to the ground.

“I try to imagine when looking at porcelains or any other object. I watched a TV program that showed Itzhak Perlman’s music program in China. It was not so long after the country had opened itself to the world. I still remember him carefully watching a student performing," Koo said.

“Perlman suggested the young violin student use more imagination to picture the spring instead of going after the notes, which instantly changed the student’s performance. I think I also learned a great deal from it,” Koo continued. 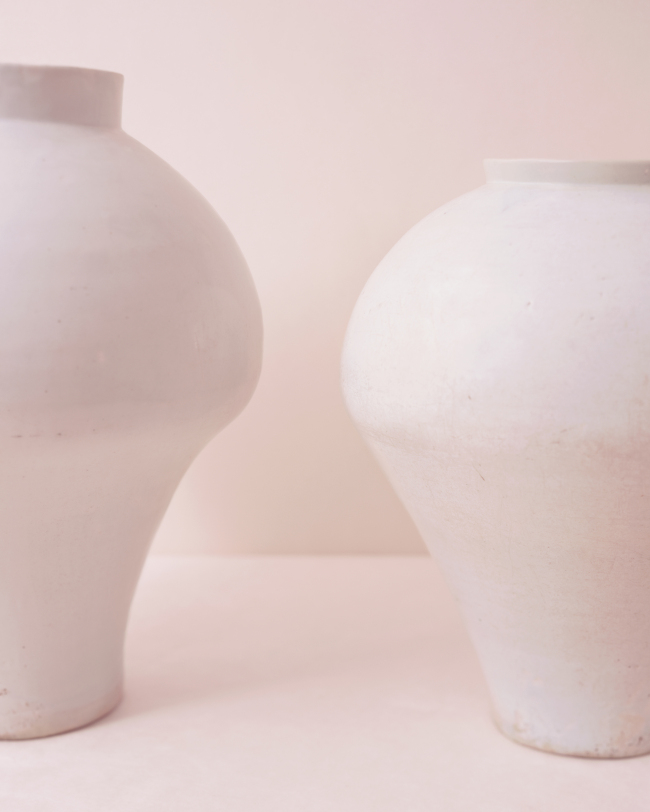 "RH 01 BW" by photographer Koo Bohn-chang (Courtesy of the artist)
“For many years, I have been trying to capture things that have been alienated or regarded as not so beautiful, or say mundane. It has been rewarding when I re-highlight them and bring to the surface new aspects. I think white porcelains are the same. White porcelains are not what would give you aesthetic pleasure at first glance,” Koo said.

What intrigues Koo is the story and time that an object or a person bears, Koo says.

“Someday, I want to ... No, I feel obliged to take portraits of North Korean defectors as a photographer. Just as Korean white porcelains have their own stories behind traveling to faraway lands, the defectors from North Korea would also carry their own stories as they traveled to China and finally to South Korea. Through my photographs, I hope to express the life that they have endured,” Koo said.

The “Blue-and-white Porcelain Jar” series will travel in June to the Ivorypress gallery in Madrid, an interdisciplinary arts venue founded by Elena Ochoa Foster, the wife of architect Norman Foster.