[Mohamed A. El-Erian] Trump-Xi will make us forget this weekend’s G-20 confab 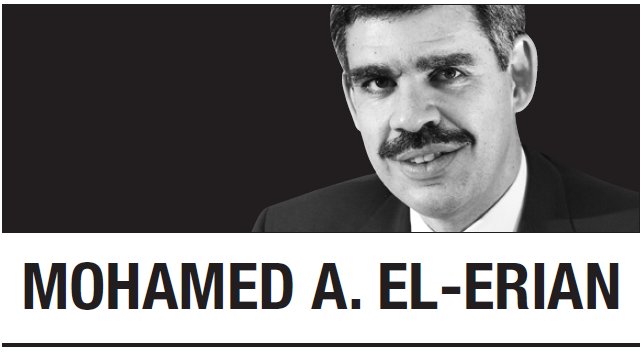 This weekend’s G-20 summit in Argentina will likely demonstrate what does and doesn’t work for this multilateral format, but also for international policy gatherings more generally. Despite weakening and diverging global economic growth, the aspiration for the larger discussions among leaders representing about three-quarters of global gross domestic product has been reduced to issuing bland joint communiques -- and that’s assuming an agreement on this can be achieved. The real action will be taking place in the bilateral meetings that occur on the sidelines, with particular interest in the conversation between US President Donald Trump and Chinese President Xi Jinping.

Created with the hope to reflect new global economic realities, the G-20 has been on a downward trend since its successful London summit in April 2009. Yes, it remains a more representative group than the G-7, which is dominated by developed economies; and yes, it has a more flexible setup than many of the long-standing international organizations. But its accomplishments -- be they in the formulation of policy initiatives or the monitoring thereof -- have been largely disappointing and limited. This isn’t expected to change anytime soon, despite the mounting challenges facing global economic well-being and financial stability.

After last month’s disappointing conclusion of the Asia-Pacific Economic Cooperation Summit, the big hope is that this time around, the G-20 will be able to agree on a concluding communique. But for this to occur, the content is likely to be watered down substantially. Such a statement would have to reconcile deep differences on key policy issues, such as China-US trade tensions, while also obfuscating political constraints on the pursuit of pro-growth policies, particularly in Europe. Meanwhile, no progress again is expected on the remedying the deficiencies of the G-20 construct, including the absence of a small secretariat that would offer greater scope for policy monitoring, reporting and continuity.

This isn’t just a G-20 issue. Little, if anything, actionable and beneficial has emerged from recent multilateral gatherings, including last month’s annual meetings of the International Monetary Fund and the World Bank, which were attended by top economic policy makers from almost 190 countries. What has proven more productive is the bilateral formats. And, this time, the focus will be on one meeting in particular.

Against the background of the escalating trade skirmish between China and the US, markets are hoping that the tete-a-tete between Presidents Trump and Xi will be seen in retrospect as a turning point for the two countries and the global economy. For this to happen, China and the US must embrace explicit policy pivots.

For Xi, this would imply credibly abandoning China’s tit-for-tat approach to US tariffs and offer concessions in three areas: relaxing joint-venture requirements on US companies operating in China, and other practices that result in forced transfers of technologies, human capital and operating business plans; providing a verifiable action plan to combat intellectual-property theft; and showing how the bilateral trade imbalance is likely to fall over time.

China would be following America’s other big trading partners if -- and it’s a big if -- it were to opt for such a policy pivot. In doing so, it would be overcoming two main concerns: saving face domestically, and tweaking what has been a very effective focus on the long game for its development process. Although this won’t be easy, it is better than the alternative of risking a major economic derailment that would seriously reduce China’s prospects for avoiding the so-called middle-income trap that has interrupted the development process of many other emerging economies.

For Trump, it would imply not only giving up on trade policy as a way to motivate his political base, but also its use to pursue national-security goals that extend well beyond fairer trade. The economic rationale for such a pivot is based on the judgement that the impressive performance of the US economy in creating jobs and starting to secure better wage growth could be seriously challenged by the further deceleration of growth in both China and Europe.

Given the large role of domestic political considerations in the calculus of both presidents, it’s hard for me to predict exactly what will come out of their highly anticipated meeting. However, I do feel confident in predicting with a considerable degree of confidence that, unfortunately, the multilateral part of the summit is likely to prove just another photo opportunity, with little if any progress on dealing with major gaps in the cross-country coordination of policies.