This time, the spotlight was shared with his family, who recently appeared on “Welcome, First Time in Korea?”

Sitting down at a cafe in the upscale neighborhood of Sinsa-dong, the 26-year-old, originally from Brisbane, Australia, looked back on showing his family around Korea on TV, an experience that he called “a blessing.”

“I had always wanted to show them Korea, but due to either time or circumstance it was not always possible. So having them in Korea for the first time and just being able to show them where I live, what I do, where I hang out. … I feel really blessed, it’s a great opportunity,” Williams said.

Williams became more widely known as “Hoju Blair” (Australian Blair) in 2015, when he enjoyed a bit of stardom for appearing on “Non-Summit,” a hit cable show featuring guests from diverse countries.

He cracked a grin as he explained how he ended up on “Non-Summit” quite by chance.

Williams said it was through the international community that he made friends with other “Non-Summit” cast members Julian Quintart and Daniel Snoeks. He calls Snoeks “the other Australian guy” who was on the show before him.

When Snoeks left the show, Williams got a call from Quintart who asked on the phone, “Hey, do you want be on the show?” Williams accepted his offer.
“It was really interesting how fast it happened. I got contacted on Wednesday, I met the production director that night. The next day I had an interview with the writers. And on Sunday I filmed. It went from being nobody to being on ‘Non Summit’ in four days.”

He said he found the opportunity scary at first when he was asked to be a regular guest, not least because he is a foreigner and did not feel confident with his Korean at that time.

But Williams does not regret his decision, which has “opened a lot of doors” for him, including friendships with Tyler Rasch and Robin Deiana, fellow panel members who he keeps in touch with.

Like other cast members of “Non Summit,” Williams, who has a day job in marketing, has managed to continue his TV career, with the cable travel reality show “Welcome, First Time in Korea?”

The show features foreign nationals living in South Korea, who invite friends or family members to the country to show them around. 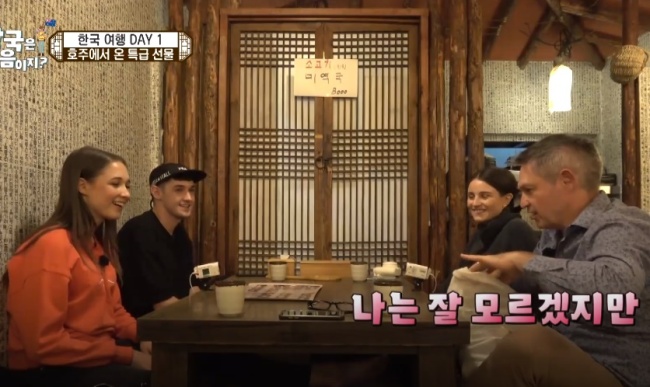 "Welcome, First Time in Korea?" (MBC Every 1)
Over a few weeks, viewers got a glimpse into Williams’ relaxed family life. It seems no coincidence that he thinks the biggest difference between Australia and Korea is the “pace of things.”

“You see it in the show -- how laid-back my family is,” Williams said.

“We say in Australia ‘She’ll be right,’” he quipped, before adding, “Australian culture seems to be very chilled and very laid-back whereas Korea is a lot more fast-paced.”

He praised Korea for how everything is open late at night and there is always something to do. But the fast-paced nature of Korean life is a double-edged sword and can be overwhelming for him, which is why he prefers to rest in the more relaxed environment of Australia.

Williams’ episodes were a ratings success. The episode that aired on Nov. 8 reached a rating of over 5.5 percent, the highest from the second season to date. To put things in perspective, the show was the most watched program on TV during its Thursday night time slot last week.

During the episode, viewers learned that Williams suffered a major medical episode in the summer of 2016 when his older brother was visiting him in South Korea.

“I had a health crisis a few years ago. They discovered something in my brain, to do with the veins in my brain. I had to go back to Australia for a while to get some treatment on that,” Williams recalled. He was diagnosed with arteriovenous malformation, also known as AVM.

Not long after having an operation in Sydney, Williams was missing home in Korea, and his father, Mark Williams, told viewers that his family let his son go back to Seoul, as they loved him very much and wanted him to enjoy life.

Williams first came to South Korea as an exchange student at Yonsei University in 2010. He spent the first few years going back and forth between Australia and Korea due to his studies before moving here for work in 2013.

“I had a few Korean friends in high school I had an interest in learning another language, so when I started university I decided that I was going to study a language. But which language would I do was kind of like a thing I was debating.

He says he ended up choosing to study Korean because he had Korean friends and visited Korea once in 2007.

Over the last few years, South Koreans have seen foreign nationals come and go on TV. And Williams, who actively engages in political dialogue on Twitter, thinks South Korean TV could use more diversity.

“It has phases. … When ‘Non-Summit’ came out, foreigners were front and center again for a while, which was nice, then it went quiet for a little bit,” he said before mentioning a growing number of diversity-themed shows such as “Welcome, First Time in Korea?”

Coming from a multicultural country where more than 1 in 4 people are born abroad, Williams welcomed the growing number of TV shows featuring foreign nationals in recent months.