By Kim Kyung-ho
Published : Sept 26, 2018 - 15:30       Updated : Sept 26, 2018 - 15:30
The country’s large companies have been piling up growing amounts of cashable assets as they remain reluctant to expand investments in the face of what they perceive as anti-business policies at home and increasing uncertainty in the global economic environment.

According to data from the Financial Supervisory Service, Korea’s top 30 companies in terms of turnover had 88.48 trillion won ($79.24 billion) in cashable assets in the first half of this year, up 11.5 percent from a year earlier. 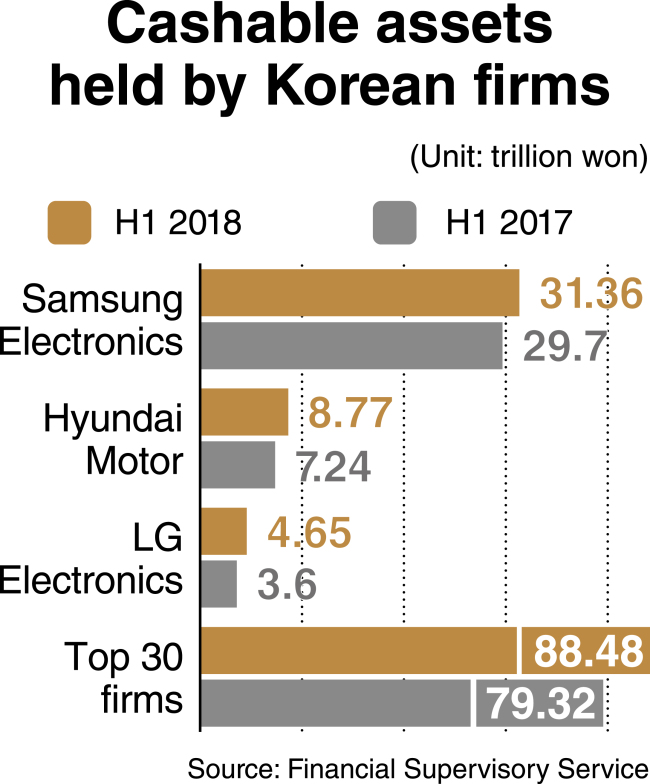 Most of the country’s top 30 businesses recorded an increase in net profits, while remaining passive on expanding investments.

Their combined net profits rose 11.5 percent on-year to 44.58 trillion won in the January-June period. By comparison, their expenditures on acquiring assets such as land, buildings, facilities and business rights increased at the far slower pace of 6.2 percent, recording 49.06 trillion won.

The increase in the amount of tangible and intangible assets acquired by the top 30 firms was attributed mainly to active facility investments by SK hynix, one of the country’s two major chipmakers along with Samsung Electronics.

Setting aside SK hynix, which raised investments 73.5 percent on-year to 8.87 trillion won in the first half of the year, combined spending by other firms on acquiring assets shrank 2.2 percent.

“Local firms now judge that investments will carry more risks than opportunities as the economy is stuck in a low-growth rut and the government’s policy is not corporate-friendly,” said Kim Hyung-ryul, an analyst at Kyobo Securities.

According to the Bank of Korea, the business sentiment index for August remained at 74, its lowest point in a year and a half.

Data from the Ministry of Economy and Finance showed overseas direct investments by Korean companies increased 25.8 percent from a year earlier, reaching $12.96 billion in the second quarter of this year.

“Steep wage increases are weakening the competitiveness of many local firms, which have difficulties finding new growth engines due to a complicated set of regulations,” said a corporate executive, asking not to be named.

“Given mounting trade barriers across the globe in addition to the deteriorating domestic conditions, we have no other option to look for opportunities abroad,” he added.


The business community’s discontent with policies pursued by President Moon Jae-in’s administration was reflected in a recent survey of 276 firms conducted by a local daily.

More than half said the Moon government was handling economic matters poorly, while just about 25 percent thought it was dealing with them well.

Nearly 60 percent said its income-led growth drive -- which entails a number of pro-labor measures, including sharp minimum wage hikes -- was having negative effects on their managerial conditions.

Most firms were also skeptical about the Moon administration’s efforts to push for innovation-driven growth through regulatory reforms, with 83.5 percent saying regulatory restrictions were still tighter in Korea than in other major advanced economies.

President Moon has repeatedly pledged to carry forward drastic deregulation, but critics say he has taken few concrete actions to overcome objections from many ruling party legislators as well as various interest groups.

“The government is confusing the market as it has yet to prove a firm will to push through the innovation-driven growth policy,” said Park Jae-min, professor of technology management at Konkuk University.

More than half of the companies surveyed predicted the country’s annual growth rate would hover below 2 percent this year, with 16.7 percent forecasting the figure would fall below 1 percent. Only 13 percent said the Korean economy would expand 2.8 percent in 2018 as projected by the government and the central bank.

Sluggish investments are aggravating concerns that high-value-added industries will continue to account for a declining proportion of the country’s gross domestic product, which means the competitive advantages of Korea Inc. are likely to get weaker.

According to a recent report released by the Hyundai Research Institute, a private think tank, high-value-added industries such as information and communications technology, aerospace and pharmaceuticals accounted for 34.6 percent of Korea’s GDP in 2016, down from 35.6 percent in the previous year.

The corresponding figure stood at 38.3 percent in the US, 36.1 percent in Japan and 35.2 percent in Germany. China also caught up with Korea in 2016, with 35.2 percent of its GDP coming from high-value-added industries.

The reluctance of local companies to increase investments stands in sharp contrast with the active facility investments on the part of Japanese companies. According to a report drawn up last week by the BOK’s branch office in Tokyo, Japanese firms’ facility investments expanded 12.8 percent on-year to 10.6 trillion yen ($94 billion) in the April-June period of this year, extending the upward trend to seven consecutive quarters.

Lee Jong-myung, head of the economic policy team at the Korea Chamber of Commerce and Industry, said the country needs to step up its efforts to strengthen the momentum for growth by accelerating deregulation and promoting entrepreneurship and startups.