Hagfish may not sound, or look, appealing, with its degenerated eyes and a snake-like body that produces slime when distressed. But that does not stop Koreans from taking up a culinary challenge with the sea-dweller.

After being thoroughly skinned, gomjangeo goes on the grill. Restaurants and pubs often grill them outside on a strong fire, such as a briquette fire. Then, diners can grill gomjangeo one more time on the grill in front of them before devouring it.

Some places serve gomjangeo live. These eateries have fish tanks in front of the stores filled with the hagfish. The odd visual of the fish is eye-catching. Diners can also see the skinning process in front of them. When the skinned hagfish goes on the grill, it moves, squirms and writhes in the heat. 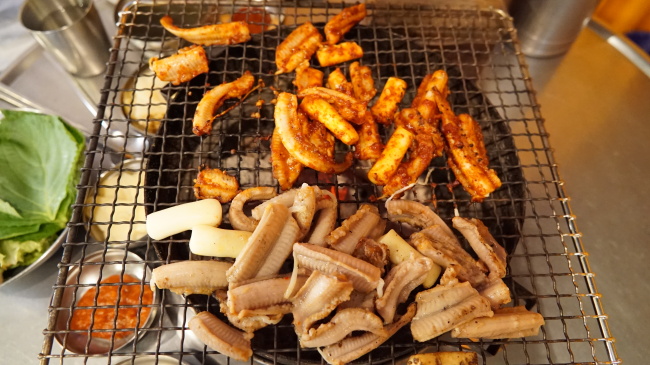 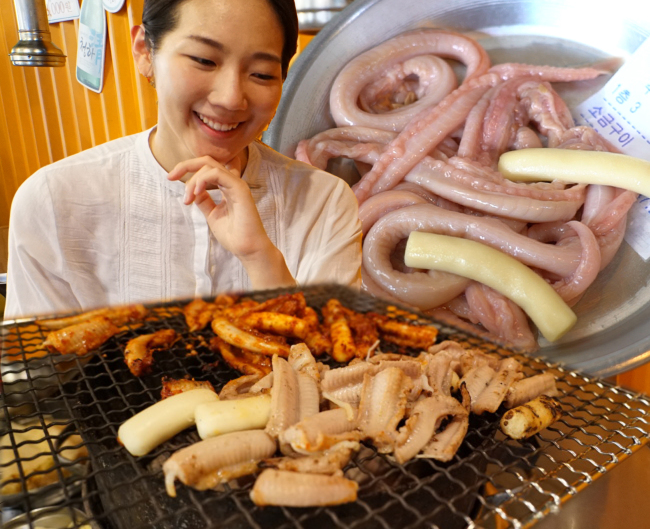 The fish is often enjoyed with spicy, red sauce. Marinated gomjangeo is fiery enough to leave one’s tongue numb. If not marinated, the fishy smell is strong. One would have no trouble detecting this was once a creature living in the ocean.

Chewy, tangy and springy are the words that come to the mind to describe the texture. It is very different from that of a typical eel, which is softer and more delicate.

One can observe a slimy, white string hanging from hagfish pieces. The string is actually the spinal cord, which gives the fish meat a savory taste. It also defines the freshness. If the spinal cord stands out, the hagfish is fresh.

Gomjangeo is actually a dialectal term. The standard word is meokjangeo. The term has spread from the Busan area to across the nation, as now most people refer to hagfish as gomjangeo.

Just to the east of Busan, Gijang is considered the hometown of gomjangeo, and there it is grilled whole wrapped around straw. The straw fills hagfish with a flavorful scent, while preserving the moisture of the fish meat.