Protracted trade friction between the world’s two biggest economies might also give them more room to prepare for the fallout from China’s ambitious plan to become a global power in major advanced industries by 2025.

Behind President Donald Trump’s toughening stance against Beijing seems to be Washington’s resolve not just to reduce the bilateral trade imbalance but also to block China from supplanting America’s technological supremacy.

This adds weight to the forecast that the Trump administration will carry forward its trade battles with China beyond the mid-term elections in November.

Given the prospect of an extended conflict between the US and China, it is improper for the Korean government to emphasize what it judges to be a limited impact from the first round of tariffs imposed by the two economic powers on imports from each other, experts say.

“The tariffs are expected to have a limited impact on Korea’s exports in the short term,” said Minister of Trade, Industry and Energy Paik Un-gyu in a meeting with officials from industry groups convened shortly before the tit-for-tat duties went into effect last week. He added it was necessary to closely monitor the development in the trade conflict between the US and China.

Experts noted his remarks lacked a sense of urgency in the face of possible consequences from the escalating trade war between the two countries, which combined account for nearly 40 percent of Korea’s annual exports. They said President Moon Jae-in or Finance Minister Kim Dong-yeon, who doubles as deputy prime minister for economic affairs, should have presided over a meeting of Cabinet members involved in external economic affairs.

“The government’s response was too easy,” said Shim Sang-ryul, a professor of international trade at Kwangwoon University. He criticized the Moon administration for lacking interest in crucial trade issues.

Experts raise the need for Korean companies to step up efforts to offset a possible reduction in shipments to China and the US by exploring new opportunities that may come from the two countries’ trade friction.

China is being pushed to open wider its domestic markets to make its case against what it has criticized as the Trump administration’s unruly protectionism.

On July 1, Beijing unilaterally lowered import taxes for some consumer goods, autos and auto parts from 15.7 percent, 25 percent and 8-25 percent to 6.9 percent, 15 percent and 6 percent, respectively.

“If Korean companies could find more business opportunities in areas where China lowers barriers, a significant amount of a possible reduction in trade could be offset,” said Cho Chul, a researcher at the state-run Korea Institute for International Economics and Trade.

Korean exporters might also use the trade conflict between Washington and Beijing to recover some of the US market shares lost to their Chinese competitors. Experts emphasize the need for Korean manufacturers to bring out products that could replace Chinese goods that would lose price competitiveness.

Without active and proper responses, the fallout from the escalating trade war between the US and China is set to further weaken Korea’s export growth momentum.

A recent KIET report forecast that the duties imposed by the US and China on $50 billion of products imported from each other would result in decreasing Korea’s annual goods shipments to China and the US by $270 million and $60 million, respectively.

An earlier study by the Hyundai Research Institute, a private think tank, made a gloomier prediction that the initial tariffs would reduce the annual shipments of Korean goods to China and the US by $28.2 billion and about $100 million, respectively.

Experts estimate a 10 percent cut in China’s imports of intermediary goods and parts that are assembled into products shipped to the US and other countries would pare Korea’s economic growth rate by 0.9 percentage points. Nearly 80 percent of Korean exports to China last year were intermediary goods.

An analysis by Pictet Asset Management in London showed that the fallout of a full-blown trade war will most severely affect Korea and other countries that are tightly integrated into the global value chain. Korea, which relies on trade for more than 68 percent of gross domestic product, ranked the sixth most vulnerable country with regard to the US-China trade dispute.

US moves to keep in check China’s ambition to dominate technologies of the future might also help Korean high-tech companies be positioned against the rise of their Chinese rivals, experts say.

China’s aggressive industrial policy is poised to pose the ultimate risk to Korea’s key manufacturing firms in the long run.

China now imports about 40 percent of Korea’s semiconductor shipments abroad to use most of them domestically. It is planning to expand the self-supply proportion of semiconductors from the current 10 percent to 70 percent by 2025, and preparing to begin massive production of memory chips later this year. 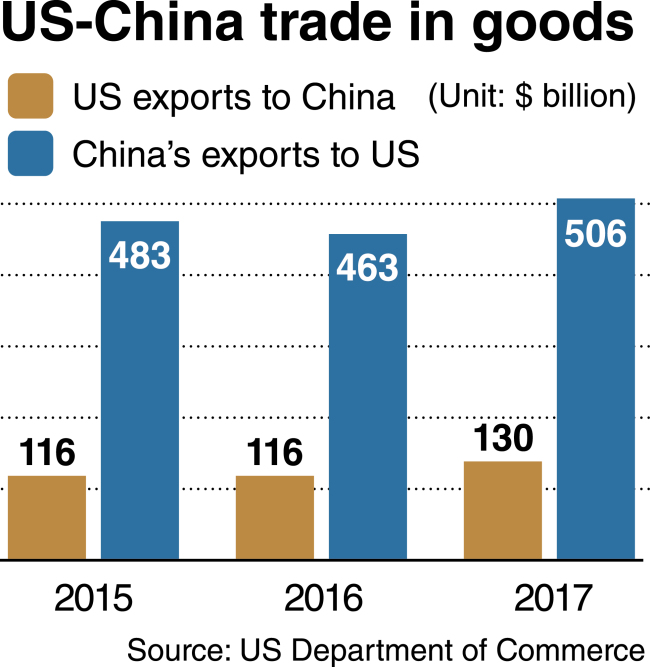