Forex reserves in Korea top $400b

Rising reserves, coupled with the moderate level of foreign currency debt and expense in foreign trade, translate into Korea’s robust external stability, according to the government.

The accumulated volume of foreign currency reserves including gold came to $400.3 billion in Korea, up $1.3 billion, or 0.3 percent, compared to the previous month, according to data from the Bank of Korea. This marked the first time that the nation’s foreign exchange reserves topped $400 billion.

Of the total, securities denominated in foreign currencies took up 91.9 percent, or $367.9 billion, up 0.4 percent from May. Securities include sovereign bonds, local government bonds, company bonds, mortgage-backed securities and covered bonds, the central bank said.

The central bank cited an increase in income from managing foreign currency-denominated assets, coupled with a weak US dollar in June that led to appreciation of the euro, the UK pound, the Japanese yen and the Australian dollar.

The reserves volume in June amounts to over 100 times larger than the bottom it hit during Korea’s financial crisis from November 1997 to 1998. On Dec. 18, 1997, the foreign exchange reserves stood at $3.9 billion.

Weathering the crisis, the reserves exceeded $100 billion in September 2001. A 2008 financial crisis brought the reserves down from $264.2 billion in March 2008 to $200.5 billion in November the same year. About 2 1/2 years later, foreign exchange reserves crossed the $300 billion threshold. 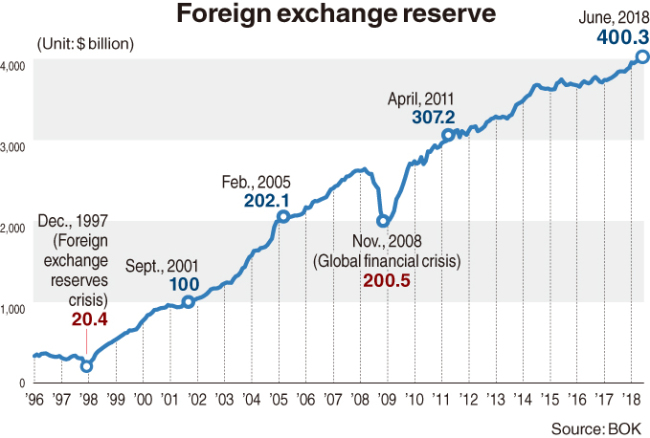 The Ministry of Strategy and Finance said in a statement Wednesday foreign exchange reserves here improved in terms of both volume and quality, contributing to higher external stability of Korea.