Data from local app analytics firm WiseApp showed that Koreans spent 1.5 billion minutes on Instagram in May this year, marking a 36 percent increase from 1.1 billion minutes recorded in May 2017.

Instagram’s jump in popularity was led mainly by women in their 20s and 30s, with those in their 30s spending the most time on the photo-sharing app, said the app tracker.


The trend appears to be driven by 30-something women who engage in lifestyles considered “ideal” for sharing via Instagram, according to Lee Taek-gwang, a culture critic and professor of global communication at Kyung Hee University.

“On Instagram, people show off their best, happiest moments via photos. Through these pictures, they formulate ‘still-life portraits’ of themselves to be shared with and liked by friends as well as strangers, who connect via hashtags,” Lee said.

And those best suited for such activities are women in their 30s, many of whom have successful careers as well as financial resources, time and social status to create Instagram-worthy moments.

“Teenagers don’t have much to show off on Instagram, because they don’t have the money. Those in their 20s are starting to get there, while the 30s population are already there,” said the culture critic.

Facebook’s waning popularity could be linked to people’s rising preference for simplicity, as a picture is easier to upload than carefully crafted text, Lee explained.

“Compared to Instagram, Facebook is largely text-based and functions as a more closed network with friends. You have to share your opinion and thoughts on Facebook, which takes more thought. But with Instagram, a picture is all that is needed to show yourself,” Lee said.

Facebook Korea, which operates both Facebook and Instagram in the local market, said it could not provide official statistics on user activity for the two apps at this point.

Like Instagram, Twitter also saw a 22 percent increase in its usage time in May, from 900 million minutes in the same month last year to 1.1 billion minutes in May this year, according to WiseApp.

WiseApp’s data was based on a sample survey of 23,000 Android smartphone users in Korea, which was adjusted to reflect the breakdown of the smartphone user demographic here. 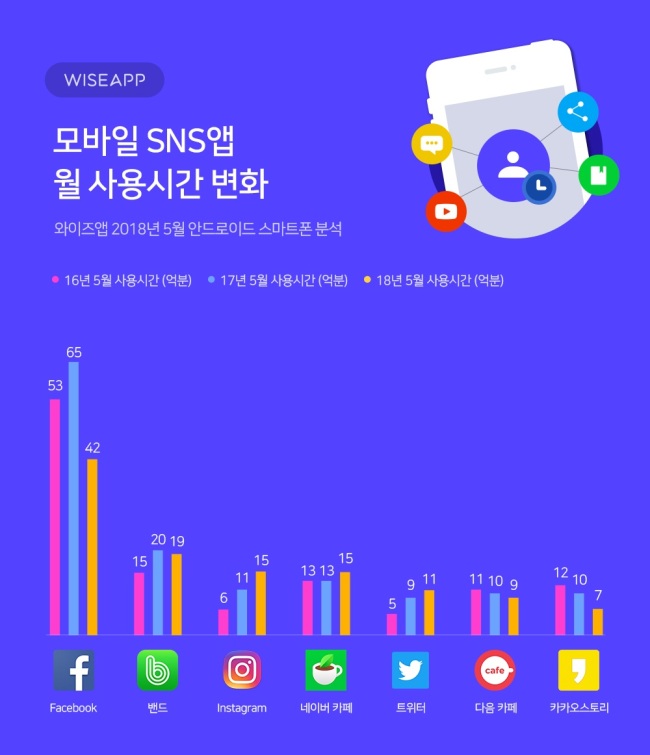