Under an agreement reached last week by lawmakers on the parliamentary labor committee, monthly bonuses and lodging and transportation expenses will be gradually incorporated into minimum wage calculations by 2024.

Next year, monthly bonuses that exceed 25 percent of the minimum wage and lodging and transportation expenses above 7 percent of it will be counted toward total pay when calculating the minimum owed.

Some workers had been considered to be on the minimum wage regardless of whether they also received regular monthly bonuses and allowances. This entitled them to increases in pay when the minimum wage was raised, even when their bonuses meant that their total income was actually much higher than the statutory minimum wage.

The new move would factor in total pay rather than just the hourly rate when calculating the statutory minimum. That would effectively reduce bonus-receiving workers’ right to claim higher hourly rates.

The proposed change will be put into practice starting next year, as the National Assembly passed the amendment to the labor law Monday.

The legislative action can be seen as paying heed to demands from the business community that the minimum wage include all bonuses and allowances as well as basic pay.


Labor circles, which have vehemently opposed the idea, are threatening to go on strike to protest the passage of the labor act revision.

In a statement Friday, the Federation of Korean Trade Unions, one of the two major umbrella labor groups in the country, described the parliamentary move as a “death sentence to the minimum wage system” and a “declaration to scrap the government’s income-led growth policy.”

Expectations have been raised that the proposed change to the way the minimum wage is applied could help reduce employment costs to some degree.

But many experts note the move would increase the chances of a sharp increase in the minimum wage for next year, similar to the 16.4 percent hike this year, as workers seek a bigger increase to offset any losses from the new calculations. It might also do little to narrow the wage gap between high- and low-paid workers.

The country’s minimum wage rose at single digits ranging from 5.1 percent to 8.1 percent in the seven years since 2011 before this year’s double-digit increase, according to data from the Ministry of Employment and Labor.

“The planned expansion of the scope of the minimum wage will likely lead to a stronger attempt to raise next year’s wage at double digits,” said Choi Young-ki, a visiting professor at Hallym University.

Labor circles estimate the measure will pare 2.5 to 3 percentage points off a 10 percent rise in the minimum wage. 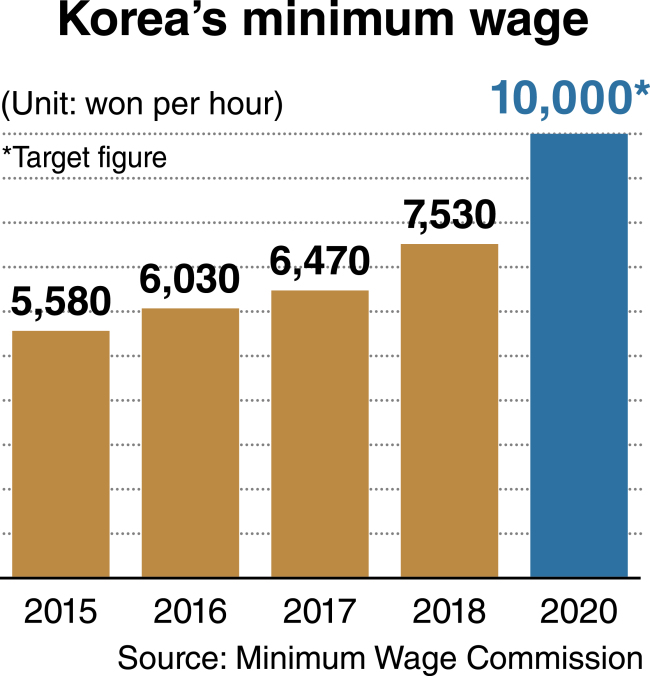 Based on this calculation, labor groups are likely to call for a double-digit minimum wage increase for next year to offset the effect of the wage scope expansion.

Some observers see labor unions’ reactions against the labor law revision as being aimed at strengthening their demand for a steep wage hike.

A commission comprising 27 members representing business and labor circles as well as public interests by an equal number is required by law to decide on the 2019 minimum wage by June 29.

The current composition of the Minimum Wage Commission heightens the possibility of the minimum wage rising at a steep pace next year. Pro-labor figures were designated by President Moon to replace eight of the nine commission members representing public interests when their three-year term expired in April.

Members chosen by the government are positioned to hold the casting vote in deciding on the minimum wage with their counterparts from business and labor circles generally opposing each other.

Lawmakers involved in rewriting the labor act say the minimum wage scope expansion will not reduce wages for low-paid workers receiving less than 25 million won ($23,000) a year, while making it harder for employees paid large bonuses to benefit from future minimum wage hikes.

The revised law allows companies to pay bonuses on a monthly basis instead of on a bimonthly, quarterly, semiannual or annual basis. But many firms will have difficulties making the change over objections from labor unions as the way to pay bonuses is usually stipulated in a labor-management accord.

Small businesses that are struggling to stay afloat will continue to be subject to the full impact from minimum wage hikes, as few of them pay bonuses and other benefits to employees.

Recent data from Statistics Korea have deepened concerns that the minimum wage increase, a key part of the Moon administration’s income-led growth drive, is worsening the livelihoods of low-income households.

The average monthly income of the bottom 20 percent dropped 8 percent on-year to 1.28 million won in the first quarter of this year, marking the sharpest decline since 2003 when relevant data began to be compiled. In contrast, the top 20 percent saw earnings grow 9.3 percent to 10.15 million won over the cited period.

“It can be presumed that the reduction in low-wage jobs caused by the steep minimum wage hike has resulted in the decrease in earnings of low-income families,” said Ju Won, an analyst at the Hyundai Research Institute, a private think tank.

According to separate figures released earlier by the state statistics office, the number of temporary and part-time workers, who are mostly minimum wage earners, slid by more than 180,000 on-year to 6.07 million in the first three months of the year.

Hit most severely by this year’s minimum wage hike were wholesale, retail, lodging and restaurant sectors, which combined shed 98,000 jobs over the cited period.