The film was shown in the noncompetitive World Cinemascape section of the Jeonju International Film Festival early this month, where the movie’s main actress Sarah Adler also served on the jury. The Korea Herald sat down with writer and director Ofir Raul Grazier ahead of a screening on May 6.

“I had a friend who had a double life. He had a wife, children, like a normal family, heterosexual life, and he would go to be with other men, and then one day he died. Just died. Just died from cancer,” Grazier said in explaining the film’s origins to The Korea Herald. “After that I’m not sure the entire story, but I believe that his wife found out.” 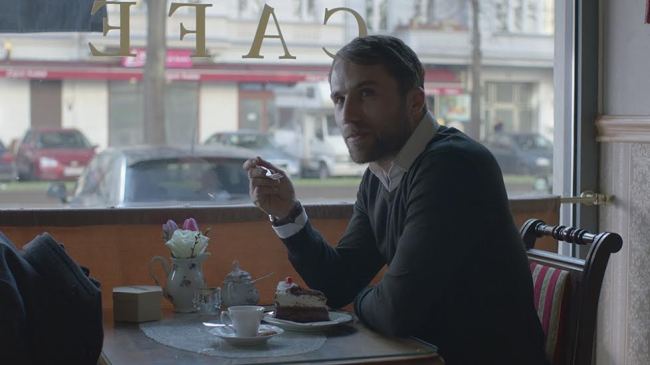 The idea quickly sparked Grazier’s imagination, as he wrote out a first draft of the screenplay in five days that would eventually take him eight years to screen as his first feature. “I wanted to see this movie. I wanted to make it so that I could watch it,” he emphasized.

“The Cakemaker” is a cross-cultural journey that begins in Berlin with an affair between a married Israeli man and young German baker. When the man dies suddenly, the baker -- Thomas, played by Tim Kalkhof -- goes to Jerusalem to see for himself the life his lover left behind. In doing so, he finds his way into the man’s family, working at the coffeehouse run by his widow Anat.

The film is gorgeously shot, with the same kind of meticulous care Thomas is shown giving to the cakes and cookies he produces, as the director’s passion for the subjects shines through.

Historical difficulties between Germans and Jews are not lost in “The Cakemaker,” but even tweaked and played with. Ill-fated lover Oren is a Jew who works for a train company in Germany and, after getting a job at the coffeehouse, the German baker is scolded and barred from using the oven – with the terms “kosher” and “Shabbat” coming up often.

Inescapable for its Jerusalem setting, conflict between Palestine and Israel is also a backdrop to the film, but Grazier seeks to go beyond the historical and political.

“This is a very personal story about loss and love and feelings of people. And it has a very complicated political context -- religion, nationality and history -- and the reason I did that is because I want to say that the political context has to be pushed aside and the personal will come,” Grazier said at the Jeonju film fest.

As Thomas settles into a new life in Jerusalem near his former lover’s widow, he seems just as curious as the audience about what will happen next, pushed on by his emotion and without calculation. How can he grieve for a secret lover? And how does his perspective change as he is accepted into a culture and family that could be hurt by knowing his truth?

The success of the film emerges from the way it weaves together the mournful emotions of the baker, the widowed wife, the couple’s young son and the connections between them, as they break through barriers they may have been unaware of.

“Successful is a matter of perspective, you know,” Grazier told The Korea Herald. “I have to constantly remind myself that this is a moment, this is right now. ... When I do my next film it might not happen, you know. Maybe they will hate it.”

For the director’s sophomore effort, nothing has been set yet, but he’s begun writing for three projects he describes as vastly different genres, and is seeking other materials to develop.

“I’m interested very much not to direct my own material. It’s like my biggest fantasy. I don’t like writing. I hate writing -- so boring,” he explained. “Film is not about writing. It’s about camera and lens and light and color and music and sound and faces.”

Meanwhile, rights were sold for a US remake of “The Cakemaker” just last month. “This is happening now, as I speak,” Grazier commented, adding he would be involved, but is unlikely to direct unless it becomes a very different movie. “I don’t want to make the same movie again.”