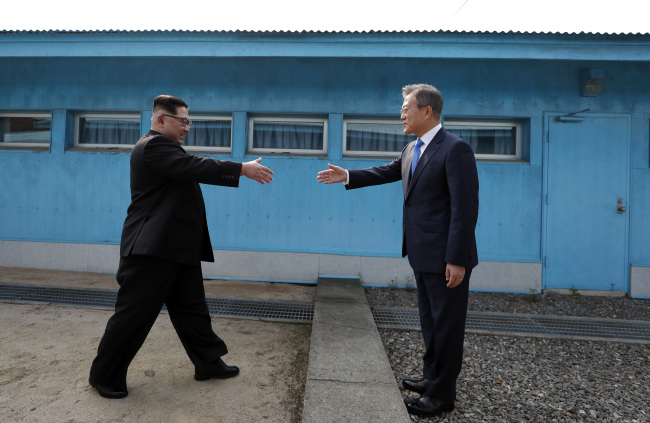 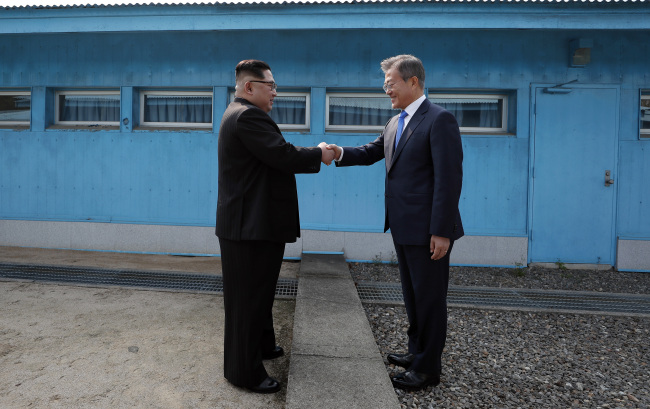 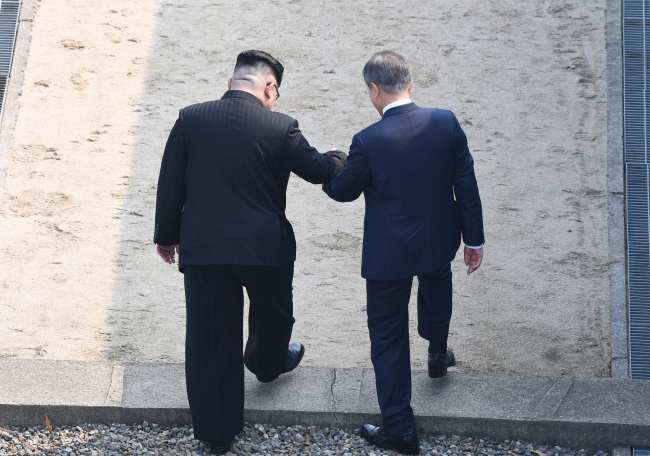 “(You) are coming to the South, when will I be able to visit the North?” Moon asked. 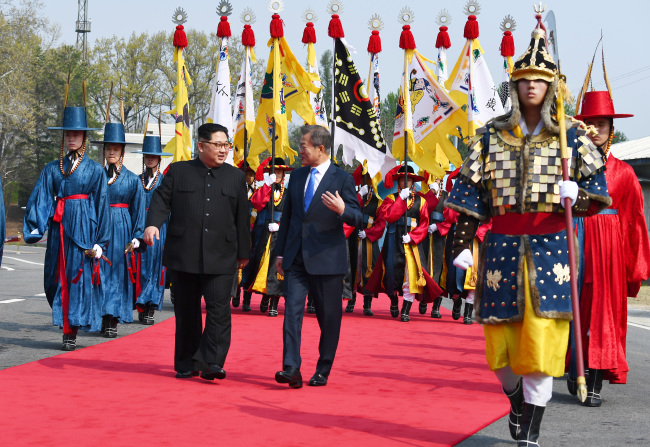 “Foreigners like out traditional ceremonial guard. It is a shame that today’s ceremonial guard has been simplified. A much better scene could be displayed (if Kim Jong-un) came to Cheong Wa Dae,” Moon said.

“If the president extends an invitation, (I) will go to Cheong Wa Dae at any time,” Kim said.

During the inspection of the honor guard 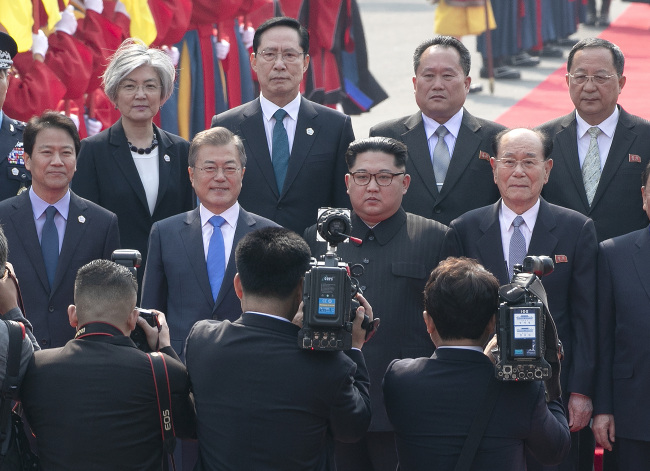 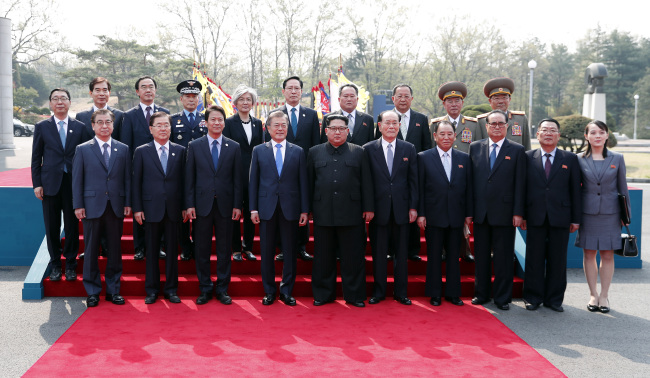 “There are those (of his entourage) who return (to the North) after the inspection,” Kim said.

“It would be nice if the South and North’s entourage all take a photograph,” Moon said, leading to an unscheduled photo session.

Viewing the painting of Bukhansan at the Peace House 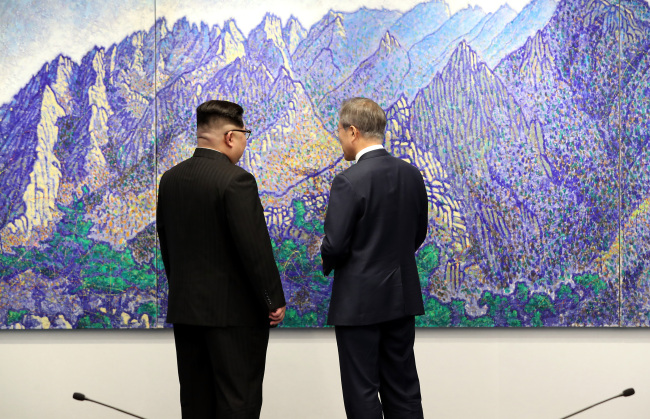 “What is the technique used for the painting?” Kim asked. 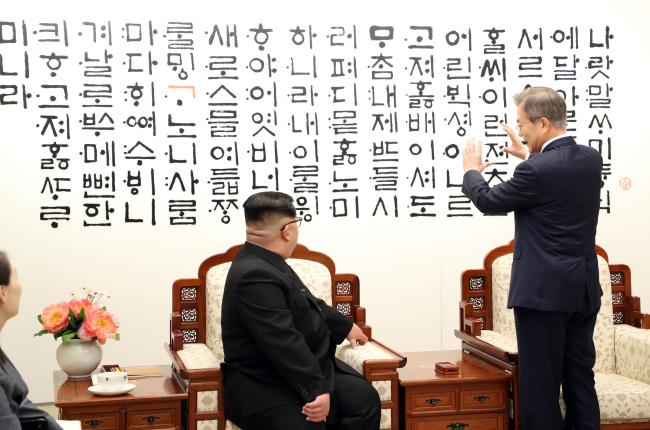 “This piece uses the letters of Hunminjeongeum created by King Sejong the Great. Here, the word ‘seorosamatdi’ means ‘connected,’ and the word contains the letter ‘mieum.’ The word ‘maenganoni’ means ‘to make.’ The gieuk is expressed differently. This means to make a connection, the mieum in ‘samatdi’ is the mieum of Moon Jae-in, the gieuk of ‘maenganoni’ is the gieuk of Kim Jong-un,” Moon said.

“Attention was paid down to the details,” Kim responded laughing.

“How did you get here?” Moon asked.

“(I) came by car at dawn and passed by Kaesong. You must have set out early in the morning,” Kim said.

“I was only 52 kilometers away, so it took about an hour,” Moon said.

“I heard that you lost sleep early in the morning attending NSC meetings because of us, it must now be a habit to wake up early,” Kim said laughing.

“As the chairman has spoken (about related issues) to the special envoys, I will be able to sleep well from now on,” Moon said.

“I will ensure that the president does not lose sleep early in the morning. Walking the 200 meters, I wondered why it took so long, why it was so difficult. Initially, I thought I would meet you in Pyongyang, but it has turned out better that (we) meet here. Many are watching (the meeting) at a place symbolizing conflict. On the way, I noticed that those who lost their homes (due to the Korean War), North Korean defectors, people of Yeonpyeong island and others who were worried about artillery shells from the North are all watching our meeting with anticipation. I hope that this will be an opportunity to heal the wounds between the South and the North. The demarcation line is not high, and would it not disappear if many people step over it?” Kim said.

“Many people saw me off on my way from Cheong Wa Dae. There is high anticipation about our meeting today. (I) took a photograph with the people of Daeseong-dong. Our shoulders are heavy. Starting at Panmunjeom today, I hope the meetings continue in Pyongyang, Seoul, Jeju and Baekdusan,” Moon said. 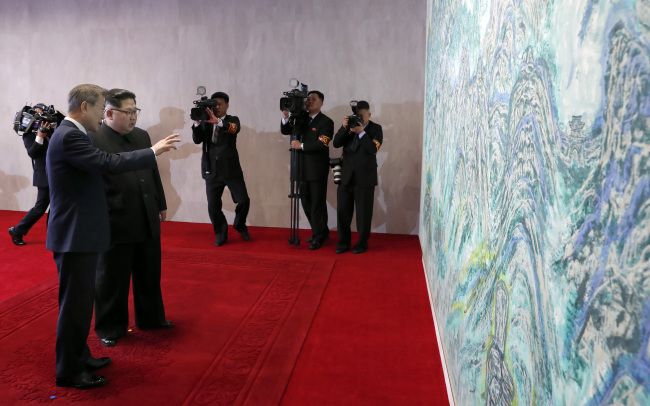 “It seems President Moon knows more about Baekdusan than me,” Kim said.

“In truth, a concern for a visit by President Moon is that the lack of transportation (infrastructure) would be an inconvenience. Those who have been to the PyeongChang Olympics say that the high-speed PyeongChang train is good. If (Moon) comes to the North after living in the South, it may be embarrassing. We will make preparations for a comfortable visit,” Kim said.

“If the railroad is connected with the North, both the South and North can use high-speed trains. This is contained in the agreement of June 15, and Oct. 4, but it has not been executed over the past 10 years. It is shameful that the flow (of inter-Korean cooperation) was severed due to changing inter-Korean relations. Chairman Kim’s bold decision has allowed the vein to be reconnected,” Moon said.

“As high as the anticipation, there are skeptical views. Big agreements were made, but not realized for more than 10 years. There is skepticism about whether the results of today’s meeting will be realized. In the short walk, I wondered if it really has taken 11 years. We have run in the past 100 days with what we have not achieved for 11 years. If we move hand-in-hand with solid will, (the situation) cannot become worse than now,” Kim said.

“I wondered if it would be uncomfortable to meet you here, but my mind was eased by the letter and the conversation with the special envoys. Trust and belief in each other is important,” Kim said. 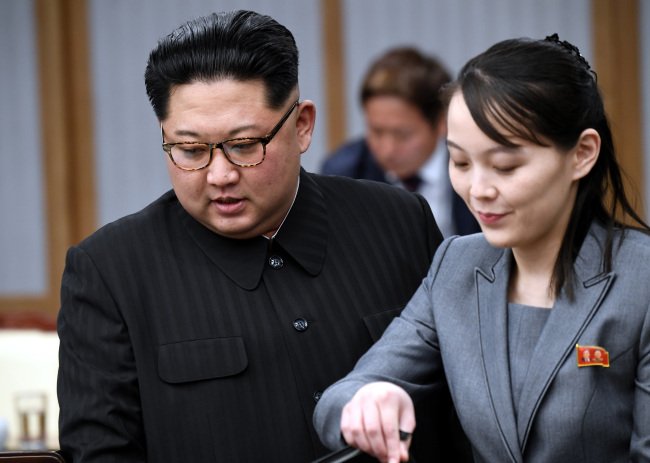 “First Vice Director Kim has become a star in the South,” Moon said, causing a laugh and Kim Yo-jong to blush.

“Today’s protagonists are Chairman Kim and I. Past failures will be mirrors in (conducting the talks) well. In the past, agreements were made at the middle or end of administrations, so action was not taken. It has been one year since I began. I hope that the speed of the process from Chairman Kim’s New Year’s speech and today can be maintained,” Moon said.

“The department of First Vice Director Kim Yo-jong came up with the term ‘Manrima speed,’ let us set it as the speed of reunification,” Kim said.

“There is a saying that one must move quickly to avoid falling in when walking on thin ice,” chief of staff Im Jong-seok said.

“Looking at the past, the most important thing is speed,” Moon said.

“Let us meet often. Steel (our) hearts to avoid going back to the starting point. Let us meet the expectations to create a better world. We will do our part,” Kim said.

Referring to the accident involving Chinese tourists in North Korea 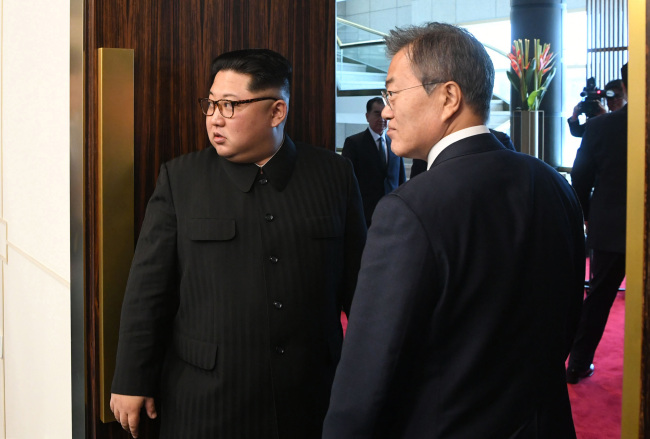 “I heard that there was a big accident in the North. I heard that Chairman Kim personally visited the hospital and offered a special train (for the dead and injured),” Moon said.

“(I) have come to end the history of conflict, to resolve issues between us with the president. I have developed a conviction that a good future will come,” Kim said.

“We are in charge of issues of the Korean Peninsula. At the same time we must become a people who go with the world. We should lead, and bring neighboring countries to follow,” Moon said.


All photos courtesy of Cheong Wa Dae if not mentioned otherwise.