According to data from Statistics Korea and the Organization for Economic Cooperation and Development, the country’s unemployment rate rose from 3.5 percent in 2014 to 3.7 percent in 2017, while the average jobless rate of 34 OECD members dropped from 7.4 percent to 5.8 percent over the same period. 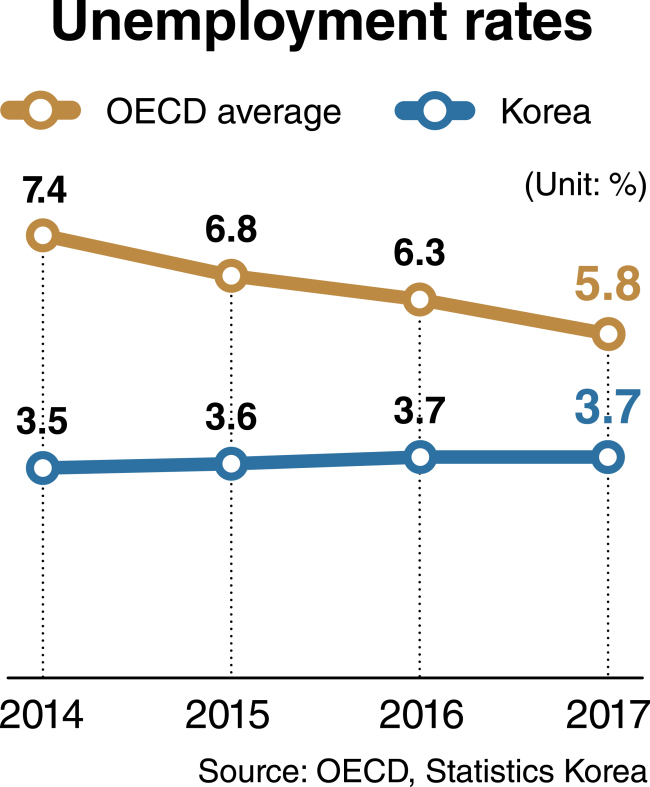 What should be noted is that Korea’s economy has grown at a faster pace than most other developed economies in the past few years, though the growth rates were lower than those recorded in previous years.

This suggests that economic expansion has less of an influence on employment in Korea, which depends heavily on big high-tech manufacturing exporters for growth and remains reluctant to carry out regulatory and labor reforms.

According to figures released Monday by the central bank and national statistics agency, the country’s ratio of employment to gross domestic product, which measures the number of newly employed people per 1 billion won ($928,200) of GDP, fell from 17.5 in 2016 to a record low of 17.2 in 2017.

“A fall in the employment-to-GDP ratio is somewhat inevitable, but the problem is that it is falling too fast (in Korea),” said Kim Joon-young, an official at the state-run Korea Employment Information Service.

A corporate analysis report showed earlier this month the country’s large profitable companies with more than 5 trillion won in assets increased their payrolls by 1.8 percent last year, a paltry figure compared with a more than 50 percent jump in their operating profits.

Korea’s job growth continues to weaken this year despite robust exports that have shored up its economy amid sluggish domestic consumption.

According to figures from Statistics Korea, the country’s jobless rate stood at 4.5 percent in March, up 0.4 percentage points from a year earlier, reaching the highest level for the month in 17 years. The figure for people aged 15 to 29 was 11.6 percent last month, compared with 11.3 percent a year earlier.

The number of people unable to find work for over six months exceeded 150,000 in the first three months of this year, the highest in 18 years.

Separate data from the KEIS, the employment information provider, showed the number of Koreans receiving unemployment benefits rose 6.9 percent from a year earlier to 628,000 in the first quarter of the year, the largest since 2010 when related data was first compiled.


Experts say this year’s sharp increase in the minimum wage has added to unemployment and the reliance on related benefits.

Government officials has downplayed the impact of the minimum wage hike, attributing the increasing number of unemployment benefits recipients to an expanding pool of subscribers to employment insurance programs.

But the number of insurance subscribers rose 2.3 percent from a year earlier in the January to March period, while the number of applicants for unemployment benefits jumped 13.1 percent.

The number of temporary and part-time workers, most of whom are minimum wage earners, decreased by 181,000 on-year during the same period.

The weakening job market was one of the factors taken into account by the Bank of Korea when the central bank decided earlier this month to hold steady its key rate at 1.5 percent.

It forecast the on-year increase in the number of employees would be around 260,000 this year, far short of the government-set target of 320,000.

BOK Gov. Lee Ju-yeol said it was too early to assess the negative impact of the minimum wage hike on the job market.

But he expressed worries that sluggish employment would reduce household income and private consumption in the near term and, if protracted, could undermine the country’s growth potential.

President Moon Jae-in’s administration has tried to bolster employment by increasing fiscal expenditure, drawing up supplementary budgets designed to create more jobs particularly for young people for two consecutive years since it was launched in May.

But economists note government-subsidized employment programs are ineffective and unsustainable.

They indicate efforts should be stepped up to accelerate deregulation, labor reforms and corporate restructuring to encourage companies to make more investments and offer more job opportunities.

“Employment policies put forward by the incumbent government has not only functioned well, but brought about negative effects,” said Park Young-ryeol, professor of economics at Yonsei University.

Drastic deregulation is needed particularly to help boost service industries that tend to hire more workers than the manufacturing sector.

A 2016 study by the Hyundai Research Institute, a private think tank, showed the number of new employees needed to produce added value worth 1 billion won additionally were 23 for service industries, compared to 10.5 for manufacturing.

An OECD report indicated in the same year that there were four times more regulatory rules on service businesses than on manufacturing industries in Korea.

Regulatory reforms are also needed to develop new industries such as artificial intelligence, remote medical care and big data marketing, which will be more instrumental in boosting employment, experts say.