The number of people receiving unemployment benefits reached a record high of 628,433 in the first quarter of the year, according to recent data from the state-run Korea Employment Information Service.

The figure marks a 6.9 percent rise from a year earlier.


Government officials claim the increasing number of unemployment benefits recipients is attributed mainly to an expanding pool of subscribers to employment insurance programs, downplaying the impact from the minimum wage hike.

The number of temporary and part-time workers, who are mostly minimum wage earners, dropped by more than 180,000 on-year to 6.07 million in the first three months of the year.

Hit most severely by this year’s minimum wage hike were wholesale, retail, lodging and restaurant sectors, which combined shed 98,000 jobs over the cited period.

President Moon Jae-in’s administration has said a significant increase in the minimum wage is needed to bolster workers’ livelihoods and push for what it describes as income-led growth. 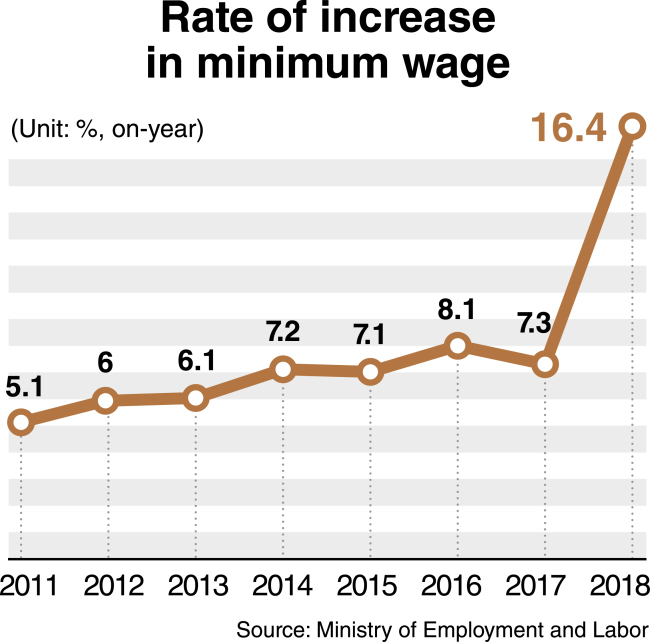 Moon and his aides have argued it is too early to judge the effect of the minimum wage increase, which marked the biggest jump in nearly two decades.

But critics say the negative effect is more severe than expected and needs to be addressed in a more serious and urgent manner.

“It is necessary to ease the negative impact by readjusting the scope of the minimum wage and differentiating it by region,” said Cho Kyung-yup, a researcher at the Korea Economic Research Institute, a private think tank.

He added caution should be taken in further raising the minimum wage.

Chung Un-cheon, an opposition lawmaker, warned another steep minimum wage hike would wreak havoc on small businesses that have been struggling to stay afloat.

But the possibility seems not so high that the minimum wage will increase at a modest pace next year and its scope will be substantially widened to help lessen employment costs.

A commission comprising 27 members representing business and labor circles as well as public interests by an equal number is supposed to decide on the 2019 minimum wage by June 29.

Last week, a parliamentary committee undertook discussion on changing the scope of the minimum wage after the commission had failed to reach a conclusion on the issue.

The business community has called for the minimum wage to include all bonuses and various allowances as well as basic pay, while labor circles have vehemently opposed the idea.

Ruling party members on the parliamentary committee on environment and labor are said to be considering adding monthly bonuses and lodging expenses to the minimum wage.

The measure would do little to help ease burdens on small firms and self-employed businesses, which hire most of about 4.6 million minimum wage workers in the country.

“We are now being pushed to close our factory. How can we afford to pay bonuses to our employees?” said an owner of a small manufacturing firm, asking not to be named.

On the other hand, workers at large profitable companies are expected to continue to receive bonuses that are paid on a bimonthly, quarterly, semiannual or annual basis.

Lodging expenses are usually paid to immigrant workers and few local employees benefit from them.

Small business owners demand that the minimum wage include food and transportation expenses and all other extra benefits.

It is also unclear whether the ruling party’s proposal will get consent from opposition lawmakers.

A failure to pass a bill on changing the scope of the minimum wage by the end of this month would complicate upcoming deliberations by the Minimum Wage Commission.

A wider scope of the minimum wage might allow commission members to be more flexible on the increase rate for next year.

The country’s minimum wage rose at single digits ranging from 5.1 percent to 8.1 percent in seven years since 2011 before this year’s double-digit hike, according to data from the Employment and Labor Ministry.

If Moon’s campaign pledge is to be fulfilled, the minimum wage will have to increase at least 16 percent in 2019 and 2020 each.

If pro-labor figures are designated by Moon to replace eight of the nine commission members representing public interests when their three-year term expires later this month, the possibility of raising next year’s minimum wage at a steep pace will be heightened.

Members selected by the government are positioned to hold the casting vote in deciding on the minimum wage with their counterparts from business and labor circles running parallel with each other.