By Shin Ji-hye
Published : Mar 26, 2018 - 11:59       Updated : Mar 26, 2018 - 18:42
South Korea has been exempted from US steel tariffs in return for cutting its exports volume by 30 percent, Korea’s trade minister said Monday after returning from a third round of talks on revising the Korea-US free trade agreement in Washington a day earlier.

The steel tariff was put on the negotiation table after the Trump administration signed an order to impose a 25 percent tariff on imported steel earlier this month.

Korea will be the first nation the US has excluded from the list.

“This is the outcome that Korea has achieved amid difficult circumstances,” Trade Minister Kim Hyun-chong told reporters Monday during the press briefing in Seoul.

“Korea’s exports to the US are the third most after Canada and Brazil. When we arrived in the US four weeks ago, the prevailing mood was that Korea is damaging the US steel industry by transshipping Chinese products,” Kim said.

Although Korea has avoided the worst-case scenario, the reduction of around 30 percent of exports will still hurt the Korean steel industry, particularly the pipe and tube sector that accounts for more than half of Korea’s total steel exports to the US.

Last week, Donald Trump said his administration would delay the steel tariffs for some allies, potentially including the European Union, Korea, Canada, Mexico, Brazil, Argentina and Australia, until May 1, with negotiations underway. He has indicated that Canada and Mexico would be exempted depending on the renegotiation of the North American Free Trade Agreement.
The Korea Iron & Steel Association in response to the latest development said, “It is a good thing that Korea is exempted from the high tariffs, but we still feel sad the government’s effort to secure greater quota (from the US) was not fully achieved.”

As to the sensitive agricultural sector, the trade minister said the Korean government has not accepted the US side’s request to further open the Korean market. 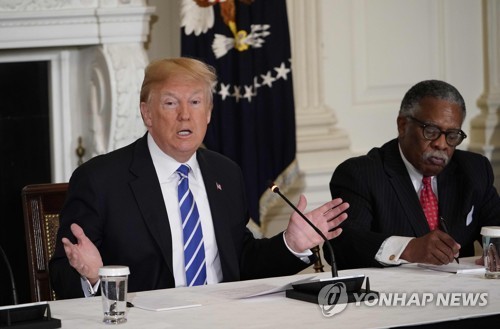 Korea, meanwhile, has agreed with the US to maintain the 25 percent tariff for Korean-made trucks until 2041, and adopt some flexibility for automobile safety and environmental standards, according to ministry officials.

During the three months of talks, the US primarily raised the issue of the automobile sector, where the US sees the greatest trade deficit between the two nations. The deficit in the auto sector stood at $12.9 billion last year, accounting for 72 percent of the total $17.8 billion, according to the Korea International Trade Association.

The government said the US tariff removal would be made in 2041, instead of the original 2021, citing that they had agreed to the move considering the export volume of trucks from Korea was not significant.

The local automobile industry, although not fully satisfied, expressed relief.

“We had great concerns toward the outcome of the trade negotiation as the automobile sector was highlighted as the biggest issue of concession. We appreciate the government’s negotiation efforts to retain the current situation,” the Korea Automobile Manufacturers Association said.