Athletes, staff and spectators making their way to PyeongChang this winter will have plenty to see in between the Olympic Games, with the latest robots from South Korea roaming the grounds to offer guidance, travel support and entertainment.

Olympic observers got their first taste of the technology that will be on show at the Winter Games with the torch relay, which featured the world’s first sight of two robots carrying the iconic flame in Daejeon.

Thousands of spectators gathered in the city last month to see Hubo -- a humanoid rescue robot developed by a team of researchers from the Korea Advanced Institute of Science and Technology -- participate in the torch relay.

Arriving on the scene in a self-driving vehicle, Hubo successfully cut through a brick wall to hand over the flame to its creator Oh Jun-ho, a professor of mechanical engineering at KAIST.

Carrying the torch after Hubo was FX-2, a giant manned robot 2.2 meters high and weighing 270 kilograms, also developed by Oh. A human pilot seated on the robot controlled the machine‘s arms to pass the flame to the next human.

Beyond the torch relay, many other robots will be strolling around the grounds of Olympic venues, including stadiums, athletes’ villages and the media center in PyeongChang and its surrounding regions.

From practical guide bots for finding directions to robotic fishes swimming in water-filled tanks for your entertainment, a total of 85 robots across 11 types are being deployed at the PyeongChang Winter Games. 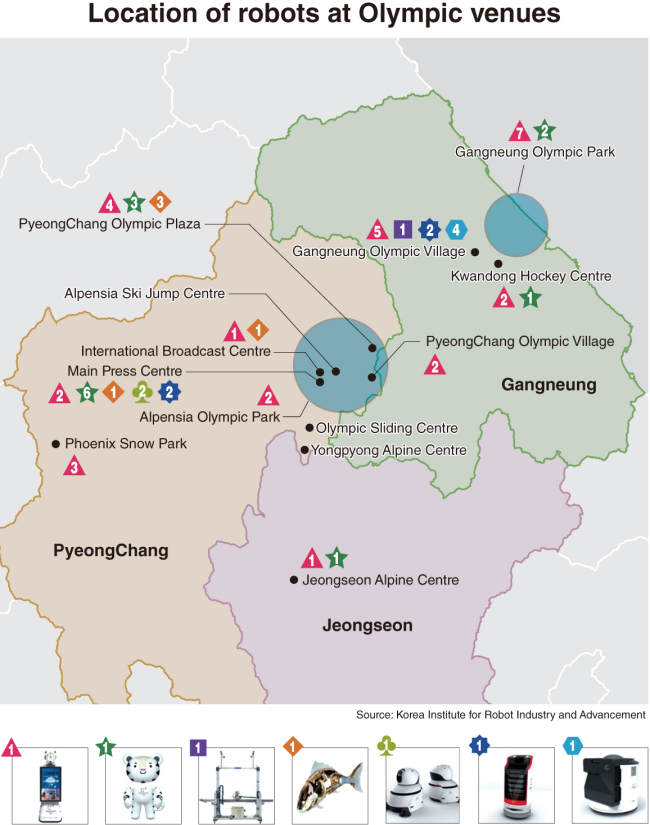 “The Olympics are an excellent opportunity to promote Korea’s robotics technology to the world,” said Oh, chief of the robot support team for the PyeongChang Olympics, during an Olympics tech forum in Seoul last week.

“In deciding which robots to deploy, we chose to exclude robots which are already familiar to the public and instead focused on those able to deliver practical and useful services during the Olympics,” he added.

Oh also expressed hopes that visitors from around the world will get a taste of how robots can be used for our benefit in real life, as well as experience first-hand Korea’s advanced robotics technologies.

The first robots to greet international guests will be situated at the airport. Hubo the humanoid robot will be handing out flowers and offering assistance to guests at the airport as well as at major hotels in PyeongChang.

Visitors flying in and out of Seoul may also run into LG Electronics’ AI-powered assistant robots as well as self-driving cleaning robots roaming the terminals.
LG’s guide robots are equipped with Hancom’s translation solution GenieTalk, and can converse in four languages including Korean, English, Chinese and Japanese. Passengers can verbally tell the robot where they would like to go and be escorted to the location by foot.

At the same time, the cleaning bots will be going around picking up trash and clearing dust at the airport. They can avoid humans in the way while keeping track of where they have been traveling to ensure they clean every corner of their designated area.

Various other robots will be offering practical assistance to athletes, staff and visitors across the Olympic stadiums, athletes’ villages and event venues in PyeongChang and its surrounding regions.

The most common find will be the Soohorang guide bot resembling Soohorang the white tiger, the mascot for the PyeongChang Olympics. It will be deployed at most of the official Olympic venues, offering transportation and event guidance in four languages including English.
Replacing human workers, several “drink-serving” robots will be distributing refreshments to reporters and athletes at the Main Press Center and the Gangneung Olympic Village. The server bots are specially designed to drive around on their own while avoiding obstacles in crowded indoor spaces.

Those with kids or tech lovers should also check out the world’s first robotic fishes available for viewing at the PyeongChang Olympic Plaza, the International Broadcast Center and the Main Press Center.

The robotic fishes, modeled on Koi and sea bream, will be lighting up waters as they self-navigate their way in waters up to 5 meters deep.
On the artistic front, Korea has also deployed 10 wall-painting robots able to create complex murals on demand based on specific topics, such as the athlete who wins the MVP award. It uses four types of inks to produce more than 1,000 different colors, and can draw on walls that are up to 20 meters high.

Other robots that visitors may encounter include self-driving cleaner bots as well as Soohorang mannequin bots that can offer direction assistance to people via voice commands. They can even dance to music on demand.
Visitors to PyeongChang should also take note of the opportunity to witness the world’s first robot ski tournament during the Winter Games.

The Ministry of Trade, Industry and Energy in partnership with the Korea Institute for Robot Industry Advancement is holding a humanoid robot ski tournament on the sidelines of the Olympics. Eight teams from local universities and tech firms are set to compete in the inaugural event.

Each team has prepared a humanoid robot with two legs that wear skis. They are all at least 50 centimeters tall from the feet to the shoulders, and equipped with sensors, batteries and deep learning algorithms that allow them to move on their own.
The tournament will follow the giant slalom alpine skiing discipline, which involves skiing downhill between sets of poles spaced out against each other.

Each team will be given three opportunities to ski down the slope, and aim for 100 points including 75 “mission points” awarded for how well it passes five obstacles, and 25 “record points” for the best time record.

The robot ski tournament will kick off at 10 a.m. on Feb. 11 at the Welli Hill Park ski resort in Hoengseong County near PyeongChang. The event is open for free viewing to any interested visitor.