Global demand for critical minerals continues to rise in keeping with the advancement of the “fourth industrial revolution,” resulting in a sharp increase in their prices.

According to data from Korea Resources Corp., the prices of cobalt, tungsten, lithium and nickel jumped 124.7 percent, 63.2 percent, 31.7 percent and 27 percent, respectively, over the past year.

Along with manganese, the four metals are classified by the state-run corporation as key materials that should be secured above a certain level of amount. The price of manganese remained little changed last year after nearly doubling in the previous year. 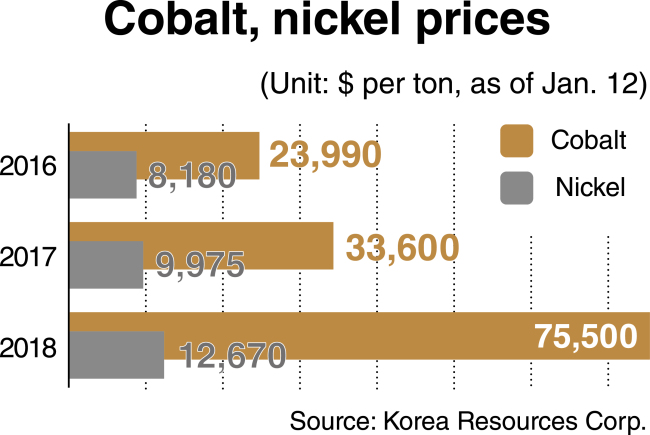 Korea, the world’s fifth-largest mineral resources consumer, relies on imports for 99.6 percent of minerals it needs.

Critical minerals production is concentrated in a small number of countries.

According to a survey conducted by the US Geological Survey last year, three largest producers accounted for more than half of production in all but one of 30 minerals, for which output data was available.

He noted it is necessary to take a strategic approach to securing critical minerals on the national level.

But the country has been inconsistent and inefficient in pushing for projects to explore and develop minerals and other resources abroad over the past years.

KORES, the state-run resources enterprise, has taken on large amounts of debts to help finance overseas projects, most of which were undertaken during the presidency of former President Lee Myung-bak.

While in office from 2008 to 2013, Lee, a former construction company CEO, pressed ahead with overseas resources development as one of his signature policies.

His successor Park Geun-hye’s administration slashed funds for resources projects, criticizing that most of them had been undertaken recklessly without a thorough review of economic relevance.

This critical view seems to be shared by President Moon Jae-in’s government, which was launched in May.

An attempt by KORES to increase its capital by 1 trillion won ($934.4 million) to 3 trillion won was blocked by ruling party lawmakers last month, raising concerns that it might have difficulties staying afloat. The company has 700 billion won in debt that is due for repayment this year.

“There is too much risk for a private firm to seek to develop mines overseas without cooperation with or support from the government,” said an official at a local trading house, asking not to be named.

China has large deposits of most of the rare metals but is still getting its state-invested firms to explore and acquire mines abroad, particularly in Africa and Latin America.

At the forefront of Japan’s push to secure critical minerals overseas are trading companies, with an organization set up by the government assuming the role as a coordinator.

Japan’s efforts have been stepped up since China stopped shipping rare earth metals to Japan amid a diplomatic dispute between the two countries in 2010.

Investments made by China and Japan in overseas resources projects in 2016 exceeded $80 billion and $100 billion, respectively. In the same year, Korea invested a mere $2.7 billion in resources development abroad, down from $11.4 billion in 2011, according to data from the Korean Federation of Industries.

“We are under pressure to show results in a short period of time, but it usually takes a decade to explore and produce minerals,” said a KORES official, who requested anonymity.

Experts note the best timing may have been missed after price hikes in recent years but the government still should work out new strategies to secure a steady overseas supply of critical minerals to help local manufacturers operate under more stable conditions.

Corporate officials express worry that the government has not yet made an accurate forecast of an increase in demand for critical minerals that would accompany growth in new industries.

KORES and the Public Procurement Service remain different in their judgment on the proper level of stocks of some critical minerals.

Experts suggest it would be more efficient to focus on developing more small-scale mines rather than competing with Chinese entities for massive projects.

They also note Korea should more actively participate in projects to develop natural resources in Mongolia, which has large deposits of various minerals, including molybdenum, nickel, copper and other rare-earth elements.

Calls have also been raised for the government to ease regulations and expand support to encourage the recycling and reprocessing of metals collected from discarded home appliances and industrial waste.