A North Korean delegation inspecting venues for its art performances for next month’s PyeongChang Winter Olympics visited candidate sites Monday, on what is expected to be the final leg of its two-day stay here. 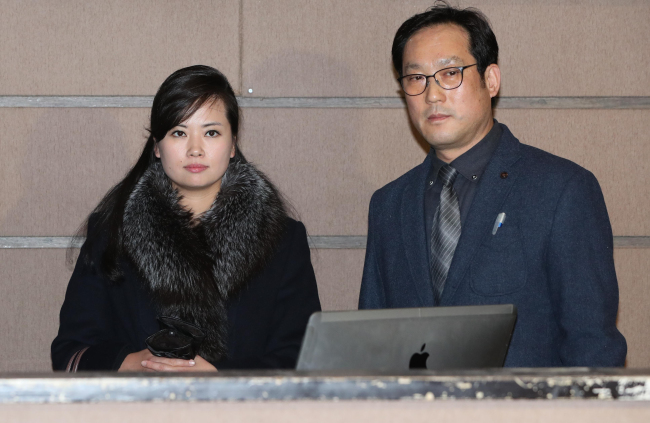 The trip came as the two Koreas are working out the details on North Korea’s participation in the Winter Olympics. The two sides agreed that a 140-member North Korean art troupe, the Samjiyon Orchestra, will perform during the Olympics in Seoul and Gangneung, Gangwon Province.

Prior to their arrival in Seoul via KTX bullet train at 11:05 a.m., the seven-member delegation, led by Hyon Song-wol, checked out a local arts center in Gangneung on Sunday and stayed overnight in the area. Hyon is head of the 140-member Samjiyon Orchestra and an alternate member of the ruling party’s Central Committee

The delegation’s first stop in Seoul was Seoul Student Gymnasium in Jamsil, a 5,400-seat multipurpose sports arena in eastern Seoul.

Jangchung Arena and the National Theater of Korea, both located in central Seoul, were their next destinations. The National Theater of Korea, which opened in 1950, has often staged performances linked to Korean traditional arts, and its Haeoreum Grand Theater can accommodate 1,563 people. The theater was the venue for previous North Korean art troupe performances in 1985 and 1990.

The delegation checked the audio system and stage lighting at the theater as the Korean folk song “Arirang” was briefly played on the sound system. They spent about 100 minutes looking around the theater, whereas they spent only about 15 minutes at each of the previous two stops.

The delegation was scheduled to wrap up its visit and return to North Korea late Monday via the Gyeongui Line in the South’s western region, the same route it used to cross the border Sunday, following a farewell dinner at the Vista Walkerhill hotel in eastern Seoul.

The South’s Sports Ministry said it has no current plans to sell tickets for the upcoming arts performances and that attendance will be by invitation. More details will be announced after the content of the performances is confirmed, it added.

Hyon’s trip here caused a media frenzy, with rumors of her being a former lover of North Korea’s current leader Kim Jong-un.

Throughout the trip, Hyon shrugged off the South Korean press corps’ questions.

South Korean society remains divided over the North’s presence at the Winter Games and the delegation’s visit to South Korea.

Conservative protesters set fire to a picture of North Korean leader Kim Jong-un and the North’s national flag at a rally Monday.

The activists, led by the far-right Korean Patriots Party, held a press conference in front of Seoul Station at around 11 a.m., just as the North Korean delegation returned from Gangneung.

Hyon’s delegation had been expected in South Korea on Saturday, but North Korea canceled that plan Friday night before it proposed a two-day trip starting Sunday. Pyongyang has yet to explain the abrupt change.

The two Koreas will exchange visits of working-level officials later this week to continue consultations on issues related to the North’s participation in the Olympics and the Paralympics that follow.

A dozen South Korean officials are scheduled to make a three-day visit starting Tuesday to the Kumgangsan area and Masikryong Ski Resort in the North’s east.

The North also informed the South of a plan to dispatch an eight-member delegation, led by a deputy director general at its Sports Ministry on Thursday, the Unification Ministry added.

The North’s team hopes to inspect Olympic facilities, such as stadiums, lodgings and the press center.