The abolition of the digital signature certificates was included in the government’s plans to “push for hyperconnectivity of intelligence innovation” designed to improve capabilities of data, networks and artificial intelligence, during a meeting presided over by President Moon Jae-in.

Digital signature certificates are electronic files issued by local authorities to identify users and to prevent forgery and falsification of documents when doing business online. They have widely been used for public and financial organizations due to their superior legal status compared to other private verification methods. 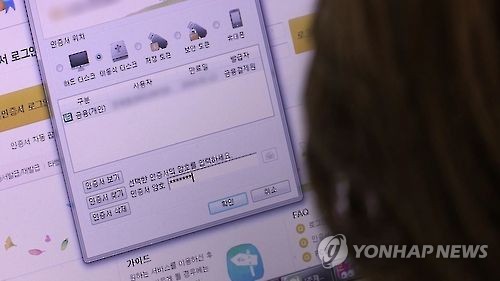 Users, however, have often found it troublesome to use the certificates because they require Internet Explorer with the ActiveX plugin, which does not work with other web browsers such as Chrome.

“The superior status given to digital signature certificates has provided convenience to connect individual organizations, but it has also inhibited technology innovation. We hope to see more innovative businesses in the areas of fintech and e-commerce (through the abolition),” said Yang Hwan-jung, chief of the information technology policy division of the ICT Ministry.

Alongside the abolishment of the authentication certificates, the government has also announced policies in the areas of personal information, drones and communications networks.

As to drone technologies, regulations will be lessened and financial support will be provided to boost the industry. The government will lead the development of the K-Drone system, which can safely and efficiently manage drones based on information and communication technology, big data and artificial intelligence. The development of K-Drone will be completed by 2021 and will be used from 2020 for the future drone delivery service and air taxi services.

In order for the advanced commercial launch of the fifth-generation network, the government will revise laws to push for the joint use of communications facilities. The joint establishment and usage of network currently limited to wire business providers will be expanded into mobile carriers.