Betraying policymakers’ expectations, the prices of expensive apartments in Seoul, which were mainly targeted by tighter mortgage rules and other restrictive steps, have continued to rise, while house prices in most provincial areas are on a downward trend.

Largely affected by a set of restrictive measures announced on six occasions since Moon took office in May, the number of home transactions around the country fell 10 percent from a year earlier to 947,000 last year, according to data released last week by the Ministry of Land, Infrastructure and Transport. 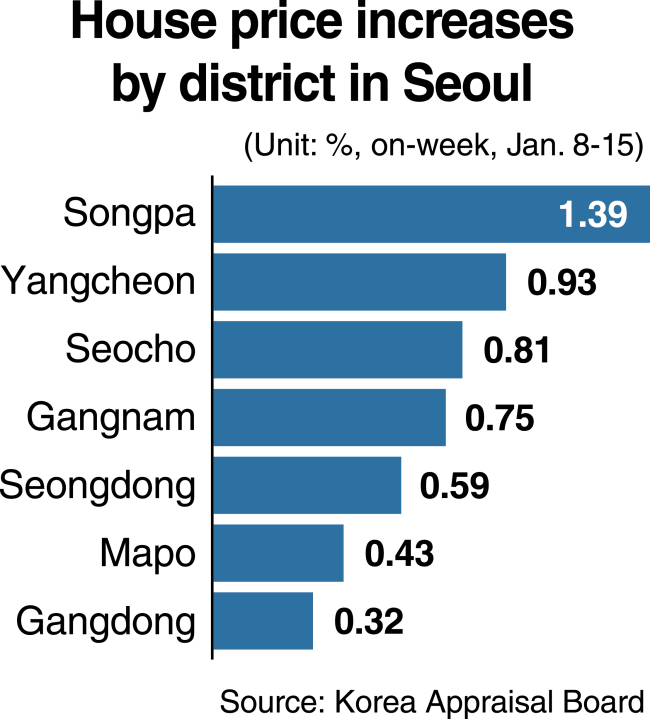 Particularly in the posh Gangnam and Songpa districts in southern Seoul, house prices rose 6.4 percent and 6.2 percent each.

As of the end of last year, the total market price of apartments in Seoul stood at about 867 trillion won ($810.6 billion), up 13 percent from a year earlier. The figures for Gangnam and Songpa rose 13 percent and 21 percent on-year to 139.5 trillion won and 102.4 trillion won, respectively.

The gap in house prices between Seoul and regional areas are continuing to widen this year.

According to recent figures from the Korea Appraisal Board, apartment prices in Seoul rose 0.39 percent from a week earlier during Jan. 8-15, with those in Songpa recording the largest weekly gain of 1.39 percent. To the contrary, provincial areas saw home prices decline 0.05 percent on average.

Experts note restrictive measures taken by the government have led to reducing demand in provincial housing markets troubled with oversupply, while leading home buyers to flock to specific areas of Seoul.

Efforts to curb house prices by keeping demand in check have failed to bring intended effects in the capital, they say.

Shim Kyo-eon, a real estate professor at Konkuk University, said a set of regulations targeting expensive apartments in Gangnam and nearby districts in Seoul had only dampened regional property markets.

“It is necessary to readjust policies, given the movement of the entire housing market,” he said.

Her remarks were seen as suggesting the government would use all possible means to curb soaring home prices in the southern part of Seoul, where many apartment complexes are planned to be rebuilt in the coming years.

The Land Ministry on Sunday revealed estimates of hefty levies to be collected from excess profits from reconstruction projects.

Tax authorities recently launched probes into hundreds of home purchases in Gangnam and other areas where house prices have shown a sharp increase for possible tax evasion, following three rounds of similar inspections since August.

Ruling party lawmakers proposed a legislation bill Friday to raise property taxes on owners of multiple homes or a house worth more than 1.2 billion won.

Finance Minister Kim Dong-yeon, who had initially appeared cautious on the idea, has recently fallen in tune with the move by ruling party legislators.

“It may be relevant to raise taxes on those who possess multiple homes in terms of taxation equality,” he said in an interview days before the bill was proposed.


But experts express skepticism that such additional measures would result in curbing home prices in Seoul and reducing housing market polarization.

Shim indicated restrictions on reconstruction might only cause an additional rise in home prices by aggravating supply shortages in well-placed areas.

Increasing taxes on owners of multiple homes would also push them to retain or buy an expensive apartment in Gangnam or other preferred areas, while selling other homes, including those in provincial cities.

The positive and negative responses marked a 20 percent drop and 11 percent increase, respectively, from those in a similar poll in August.

Forty-six percent expected home prices to rise in the coming year, while just 19 percent saw a decrease. The corresponding figures stood at 34 percent and 27 percent, respectively, in the August survey.

Some skeptics even argue home prices would become more stable if the Moon administration did nothing.

“The problem is the government has paid all attention to apartments in Gangnam and owners of multiple homes,” said Kim Deok-rye, a researcher at the Korea Housing Institute.

Kim and other experts note that measures are urgently needed to prevent declining home prices from resulting in the collapse of regional economies.