By Shin Ji-hye
Published : Dec 26, 2017 - 16:05       Updated : Dec 26, 2017 - 17:42
LG Display’s plan to build an organic light-emitting diode plant in China was conditionally approved by the South Korean government after a five-month-long review, giving the green light to the firm amid growing demand for OLED TVs in the global market. 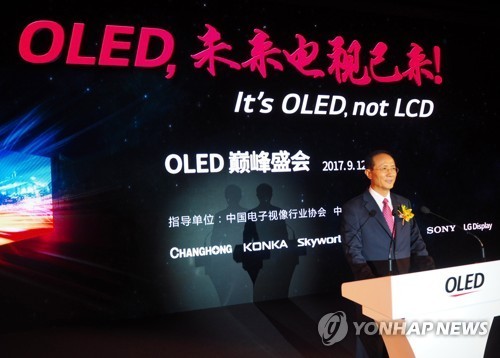 The approval, however, was made on the condition that the display maker increase the use of Korean firms’ materials and equipment; its future investments should be made in Korea; and security should be strengthened to minimize technology and manpower leakage.

LG Display welcomed the decision, saying, “With respect to the approval, we will work hard to provide products in a timely way to clients by shortening the schedule.”

At the end of July, the display firm asked for approval from the Korean government to build a plant in China. A company should obtain permission from the government before building a plant overseas to produce one of the nation’s designated key technologies in order to prevent leaks and protect key industries.

The government belatedly gave the green light to the firm, as it had been unsure whether it was appropriate to build plants in China. Some Korean conglomerates have faced operational setbacks due to political issues.