Samsung smartphone to slow in growth in 2018: SA

According to Strategy Analytics, the Korean tech giant is predicted to have a 20.5 percent market share this year with shipment of around 319 million units. 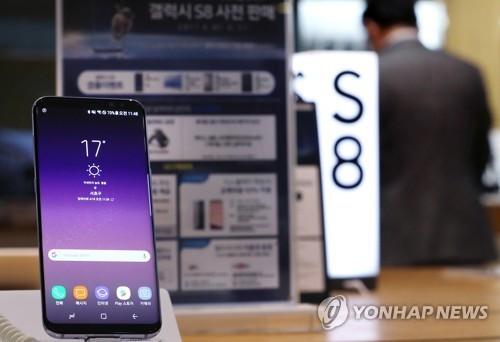 Next year, the firm will see its share fall to 19.2 percent, with shipment dropping to 315 million units, SA predicted on the grounds that the competition will be fiercer with Apple’s premium phones and Chinese firms’ budget smartphones.

This is the first time that Samsung will see its annual smartphone shipment decrease since its Galaxy S series was first launched in 2010 -- with the exception of last year’s fire-prone Note 7 debacle which resulted in 300 million units being shipped with a 20.8 percent market share.

Other companies in the top five list -- Apple, Huawei, Oppo and Xiomi -- are predicted to maintain their market share or see growth next year, the report said.

Apple’s share is expected to rise from 14 percent to 14.3 percent, with its shipment set increase from 218 million units to 234 million units next year.

The third largest smartphone maker Huawei is projected to reach 10 percent both this year and next year, with its shipment increasing to 164 million units next year from 156 million units.

Oppo is expected to have a 7.8 percent share this year and next year while Xiaomi is predicted to see its share rise to 7.4 percent from 6.1 percent during the same period.

Samsung needs to seek a breakthrough as the Chinese smartphone makers are unprecedentedly solidifying their positions in emerging markets, including China and India, with their low-cost yet quality products, according to industry watchers.

“Since successful Chinese firms are expanding their presence in the fast-growing, budget smartphone markets, Samsung’s global presence will further shrink unless it secures competitiveness against Chinese firms,” said Lee Byung-tae, a professor at KAIST College of Business.