By Sohn Ji-young
Published : Dec 7, 2017 - 15:35       Updated : Dec 7, 2017 - 18:38
South Korea’s media regulator has set out to strengthen its watch on US-based microblogging website Tumblr which has been criticized for its passive attitude in stopping the circulation of profane and inappropriate content on its platform.

The Korea Communications Commission on Wednesday announced a new set of policies to curb the prolfieration of profane content on the web, citing plans to amend current communications law to ensure they can be applied equally to both Korean and foreign internet firms.

“In the case of Tumblr, it does not respond to the KCC’s request to delete specific content,” KCC Chairman Lee Hyo-sung said, noting that the US-based social networking site has continuously refused to comply with Korean law, citing its foreign status.

“Right now, Korean (internet) companies are subject to stringent regulations, and foreign companies should not be an exception. All regulations should be (equally) enforceable,” he said.

The move comes as Tumblr has been criticized here for refusing to employ mechanisms to ensure that its sites do not proliferate posts that promote inappropriate content like prostitution or rape.

Founded in 2007, Tumblr is a website that combines blogging with social networking. It lets users post multimedia including pictures, gifs and videos to a short-form blog. Some 375.4 million blogs and over 155 billion posts were shared on the platform as of November this year.

Tumblr is currently owned by Oath, the media conglomerate owned by the US mobile carrier Verizon. Though the Tumblr website is available in Korean, the company does not have an office in Korea.

As a US company, Tumblr is currently not subject to Korean media content regulations. Citing this position, the firm has previously denied the Korean government’s request for it to join other major internet website operators in employing self-monitoring initiatives to ensure their sites remain clean. 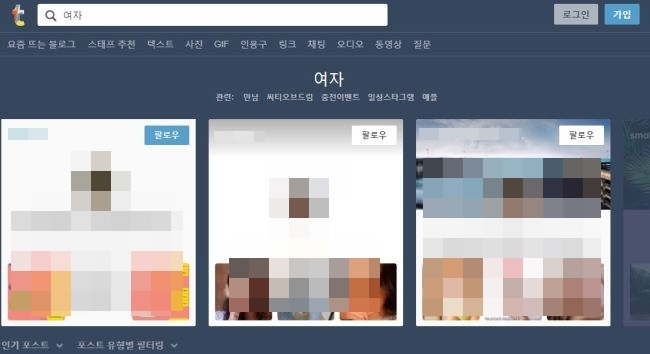 The issue became most salient when an unidentified male in Korea posted a naked picture of his allegedly under-aged younger sister earlier this year, claiming that “he has been raping her since she was in the fifth grade” and that “those who want to have sex with her should leave a comment.”

The posting received more than 9,200 likes and was “re-blogged” more than 2,000 times on Tumblr, and received numerous comments asking to be contacted, according to local media reports.

Though the police opened an investigation at the time, the case was soon closed as they could not track down the person who uploaded the posting. To join Tumblr, one simply needs an email, name and password, requiring almost no form of personal identification.

The incident led more than 40,000 Koreans to file a petition to the Presidential Office last month, calling on the government to punish those who circulate defamatory content involving individuals via foreign websites.

According to the KCC’s data publicized via Rep. Min Kyung-wook of the Liberal Korea Party in September, Tumblr posts accounted for 74.4 percent of 30,200 posts, carrying profane or prostitution-related content, that were reported to the media regulator this year.