By Kim Da-sol
Published : Nov 15, 2017 - 15:54       Updated : Nov 15, 2017 - 15:54
The state-run audit agency said Wednesday that Seoul National University Hospital should have handled without delay issues surrounding the death of an activist farmer who died last year, months after being hit by a police water cannon at an anti-government rally. 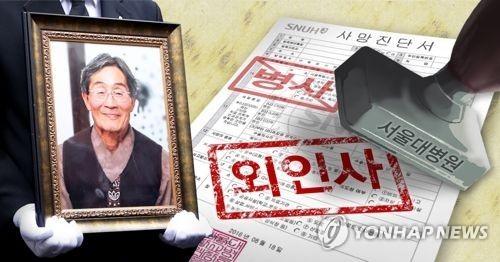 Controversy over the cause of his death ended this June, when the hospital made a rare correction in Baek Nam-gi’s death certificate to say that the activist had died due to an external force, not an illness as it had previously stated.

According to the Board of Audit and Inspection on Wednesday, the SNUH received a warning over the “delay in such important issues” as making a belated correction to the death certificate.

The 69-year-old farmer died at SNUH in September last year after spending 10 months in a coma. At the time, doctors stated that his death was caused by an illness, sparking public backlash.

Critics and his bereaved family claimed that the hospital had arrived at the conclusion due to the connection between former President Park Geun-hye and the hospital’s chief, who served as a personal doctor to the president.

“Officials at the hospital convened a meeting almost two months after the issue was first raised in March,” the agency said in the report.

“Due to such a delay and the correction made to the death certificate, the hospital suffered a serious credibility problem and negative media reports.”

Regarding why it took so long, Kim Yon-su, vice president of SNUH, said it was due to the hierarchy among doctors and supervising professors, which had hampered different views on the diagnosis from being accepted.

In September, which marked the first anniversary of Baek’s death, Prime Minister Lee Nak-yon apologized, saying that the farmer had lost his life due to the “violent use” of police power and that the tragedy represents a “betrayal of the state’s basic duties of protecting the lives of people.”