According to official data, foreign investment in manufacturing totaled $2.03 billion in the first nine months of this year on an arrival basis, slightly less than half the $4.4 billion invested in the same period of 2015.

The figure marked a five-year low. 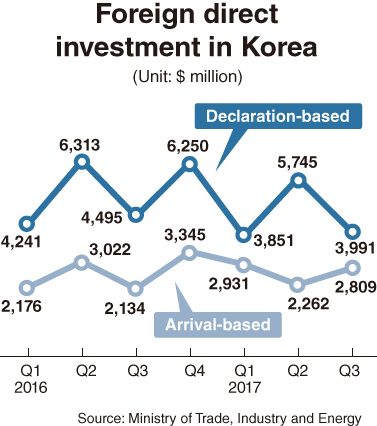 Additional investments by foreign-invested firms in expanding or upgrading existing facilities amounted to $3.7 billion in the first three quarters of 2017, also the lowest in five years.

Some foreign-invested companies here are thought to be considering moving facilities to countries with more favorable business conditions.

In a recent meeting with representatives of foreign-invested firms here, a senior official from a presidential commission on job creation expressed disappointment at their role in the Korean economy.

Lee Yong-seop, vice head of the commission, noted that foreign companies created about 70,000 jobs in Korea in the decade leading up to 2015, while Korean businesses created more than 1.1 million jobs abroad over the same period.

His remarks were met with a flood of calls to improve the investment environment in the country.

They expressed frustration that little changes had been made in the country’s business conditions despite their repeated requests for improvement.

Lee said the Moon administration would strive to attract more foreign investment as part of efforts to create more jobs.

Since Moon took office in May, however, his government has been pushing for measures that businesses say will make it harder to do business here.

A draft tax code revision includes an increase in the maximum corporate tax rate from 22 percent to 25 percent next year.

Moon and his aides have recently pledged to lift regulations on new industries, but remain reluctant to carry out regulatory reforms across the board.

The minimum wage is set to rise 16.4 percent from this year to 7,530 won ($6.80) per hour in 2018. The government is also pushing to reduce work hours and pressing companies to turn temporary jobs into permanent ones.

It has abolished measures introduced by the previous administration last year to make layoffs and changes to working conditions easier.

Labor-friendly policies pursued by the Moon administration are expected to drag down Korea’s international competitiveness.


The country ranked 26th out of 137 countries in the 2017-18 World Economic Forum global competitiveness report released in September, with its ranking going down to No. 88 in hiring and firing practices, No. 112 in layoff costs and No. 130 in labor-management relationship.

“The advantages of investing in Korea have continued to dwindle, with a whole range of business conditions seen as unfavorable,” said Lee Byung-tae, a professor at the College of Business at Korea Advanced Institute of Science and Technology.

Foreign direct investment pledged to Korea in the first three quarters of the year declined 9.7 percent from a year earlier to $13.59 billion, according to data from the Ministry of Trade, Industry and Energy.

Arrivals-based foreign direct investments in the country rose 9.1 percent as the reduced figure for the manufacturing sector was offset by improvements in service industries.

New FDI committed to Korea is expected to fall as the downside risks cited by the ministry -- rising protectionism, additional US rate hikes, the unwinding of quantitative easing in major economies and lingering geopolitical risks from North Korea -- will continue to remain in place.

According to figures compiled by the UN Conference on Trade and Development, Korea attracted 0.84 percent of foreign direct investment across the globe in 2000. The figure slid to 0.68 percent in 2010 and 0.52 percent in 2016.

The country also lagged behind Poland, Thailand and Chile, whose economies are about half the size of Korea’s, in outstanding foreign investments as of 2015.

Attracting more foreign firms here could also reduce the chance of conflict on the Korean Peninsula.

“The more companies from the US and China invest here, it will be harder for the North to launch a nuclear attack on the South,” said a former economic policymaker, asking not to be named.

The government plans to announce a package of measures aimed at drawing more foreign investors next month, which will focus on offering more incentives to investments that could lead to increasing employment.

Experts say Korea should be more aggressive and persistent in enhancing the overall investment environment.

A drastic improvement in domestic business conditions is also urgently needed to ease an exodus of Korean manufacturers abroad.

Korean companies’ overseas investments amounted to $276.2 billion for the decade through 2016, 2.9 times as much as foreign investments made here over the cited period at $95 billion.

The gap widened to 4.4 times in the first half of the year.