Local communities, suppliers step up to keep GM in Korea

Workers at GM Korea’s Bupyeong plant, a local business group and Chevrolet retailers in the nearby port city Incheon plan to sign an agreement Thursday to boost sales of the US car brands and revitalize the local economy largely connected to the operation of the Korean branch of the US carmaker. 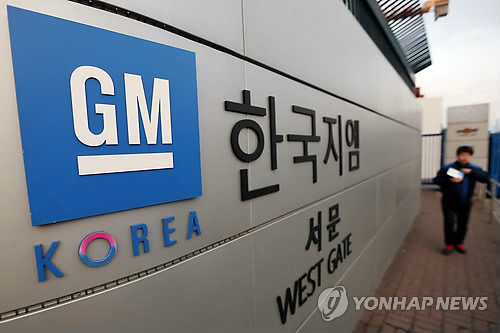 An association of about 1,200 small- and medium-sized companies in Incheon will participate in marketing activities for GM Korea, introducing special benefits including free door-to-door services, officials said.

They will encourage local community members to purchase Chevrolet vehicles by displaying the products at their offices and introducing promotions for sales, they added.

Last week, the Incheon city government and local chamber of commerce launched an association for the development of Incheon’s automotive industry, while a county council in Ongjin, Incheon, adopted a declaration to oppose GM Korea’s withdrawal, urging support from the central and local governments to keep the carmaker’s operation here.

“As the economic impact of GM Korea on Incheon’s automotive industry and the city is big, (the carmaker) desperately needs the support of the government and municipalities,” the council said in a letter of declaration.
GM Korea’s Bupyeong plant, one of four manufacturing plants here, produces signature Chevrolet models including Malibu and Trax.

The carmaker also has plants in Gunsan in North Jeolla Province, Changwon in South Gyeongsang Province and Boryeong in South Chungcheong Province.

The Gunsan city government, in a joint event with GM Korea workers and their families, held street campaigns to promote Chevrolet brands to local customers.

The city government and the local chamber of commerce announced a plan to hold a “Buy GM Korea cars” campaign to raise the carmaker’s market share in Gunsan to 50 percent.

The company has about 16,000 workers working at the four plants, paying more than 1 trillion won ($887 million) in salaries, and with about 1.4 trillion won in deals to first-tier suppliers a year.

It is feared that the departure of GM could lead to around 16,000 workers suffering from job insecurity and the massive bankruptcy of its suppliers. GM accounts for 20 percent of the economy of Bupyeong, where its local headquarters is located, with more than 20 billion won in local taxes paid a year.

GM Korea lost 531 billion won in operating deficit last year alone. When counting its piling losses from its manufacturing plant in Gunsan, which operates at only 20-30 percent of capacity, the carmaker’s deficit will hit 2.5 trillion won this year.