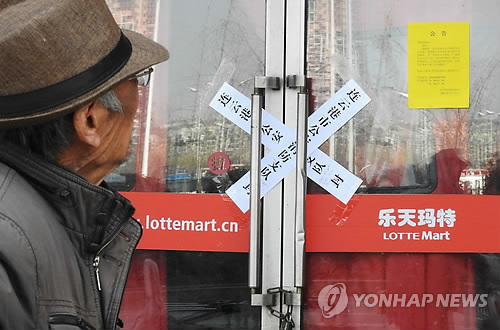 According to data submitted by Lotte Mart to Rep. Kim Su-min of the People’s Party, sales at the retailer’s Chinese stores fell 750 billion won on-year between January and August this year. Total on-year losses in sales for 2017 are projected to reach 1.2 trillion won.

After signing a land-swap deal with the Korean government for the deployment site of the American anti-missile Terminal High Altitude Area Defense system in Korea, Lotte has taken heat from the Chinese government and Chinese consumers alike.

To date, 87 of the chain’s 99 stores in China have halted operations after undergoing safety inspections by the Chinese government. The company announced that it is now seeking to sell its Chinese business.

On Thursday, Lim Byung-yun, Lotte Corp.’s head of value management, told reporters that there are several interested parties and the company hopes to see progress on the deal “by year’s end.”