Local construction orders dropped 3.4 percent from a year earlier in August, following a 33.6 percent decrease in the previous month, according to data from Statistics Korea.

The value of accomplished construction works across the country also declined 2 percent on-month in August.

This downward trend is set to be precipitated by the government’s measures aimed at curbing rising house prices and a planned cut in public infrastructure spending.

A continuous decline in overseas orders has been exacerbating the difficulties of Korean construction firms.

The amount of orders gained by Korean builders abroad last year stood at $28.2 billion, the lowest level in a decade, according to the International Contractors Association of Korea. 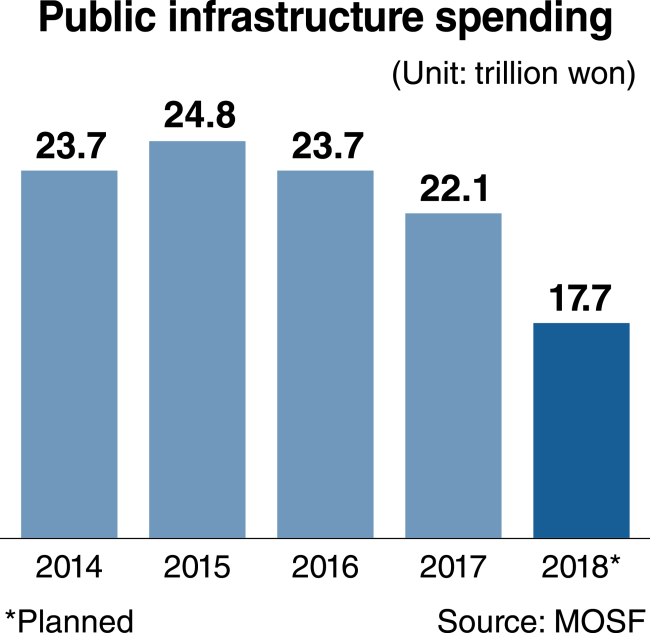 The figure for this year is seen to fall short of last year’s as the country’s construction companies received overseas orders worth $20.5 billion as of mid-September.

“A boom in housing construction since 2013 has led to an increase in construction investment. With no substitute for it in sight, the construction business is expected to only deteriorate,” said Oh Ji-yoon, an analyst at the Korea Development Institute, a state-run think tank.

Construction investment made a contribution of 1.6 percentage points to the country’s economic growth rate of 2.8 percent last year, according to data from the Ministry of Strategy and Finance.

Ministry officials have adhered to the 3 percent growth target for this year. But the goal will likely be out of reach as the construction sector slumps amid weak consumer spending and stalled industrial output.

Construction investment rose 0.3 percent from a year earlier in the April-June period of the year, one-twentieth of the increase rate in the preceding quarter.

Although excessive reliance on construction investment for growth is undesirable, leaving the difficulties facing local contractors unaddressed will cause a wide range of negative effects on the economy, economists say.

A major concern is job losses in the construction sector, which employs more than 7 percent of the country’s workforce.

The number of workers hired by local builders declined from about 2 million in May to 1.92 million in August, according to the state statistics office.

A study by the Hyundai Research Institute, a private think tank, estimates a 10 percent reduction in construction investment will result in the loss of 262,000 jobs.

Reflecting their sense of crisis, heads of the country’s five major construction associations held a joint news conference last month to call for keeping government infrastructure spending for next year at this year’s level.

Under the government-draft budget bill, expenditure on social overhead capital is set to be cut by 20 percent from this year to 17.7 trillion won ($15.4 billion) in 2018 as part of efforts to raise funds for implementing President Moon Jae-in’s election pledges to expand welfare benefits. The SOC spending planned for next year is the lowest since 2004, when 16.2 trillion won was set aside for the purpose.

A statement issued by the construction business leaders noted investing an additional 1 trillion won in infrastructure would lead to creating 14,000 new jobs.

Studies show the construction sector tends to create more jobs than other industries when the same amount of investment is made.

A sharp cut in infrastructure spending might complex the predicament of local builders, which already remain vulnerable to a slump in the housing market.

Four of the five largest construction companies in the country rely housing construction for more than 50 percent of their turnover.

Smaller construction firms face a more immediate danger of being pushed over the cliff. Some of them have received no orders so far this year, having difficulties paying wages, industry officials say.

Finance Minister Kim Dong-yeon, who doubles as deputy prime minister for economic affairs, has said consideration could be given to encouraging SOC-related public corporations to advance investment to the early part of next year if infrastructure spending cut hurts regional economies and employment.

But experts raise the need to reconsider the plan for reducing government infrastructure expenditure, saying delayed SOC investment would undermine the country’s competitiveness and cause more costs in the future.

They say it is also necessary to find new breakthroughs in overseas construction markets.

Korean construction firms’ focus on low-value projects mostly in Middle East countries can no longer be maintained amid lowering oil prices and mounting competition from Chinese and other foreign builders.

Overseas construction orders received by Korean contractors have continued to decrease in the years since peaking at $71.6 billion in 2010.

Efforts should be stepped up to work out ways to garner more value-added construction orders abroad through close coordination between the government and private contractors, experts say.