Whirlpool filed a petition with the ITC in May, seeking restrictions to stop Korean firms from flooding the US market with cheaper washers. A safeguard law is a restraint on international trade to protect home industries from foreign competition. 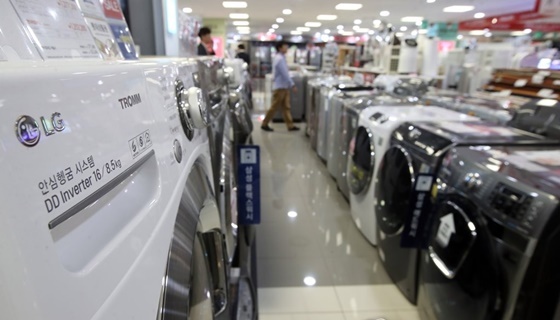 Samsung and LG’s combined share of the washing machine market in the US rose to 31 percent in the first half of this year from 23 percent in 2014, while Whirlpool’s share dropped to 37 percent from 41 percent during the same period, according to the US market research company TraQline. The two Korean firms are estimated to have shipped $1 billion worth of washing machines to the US last year.

The ITC ruled in favor of Whirlpool on Thursday, saying that a surge of washing machines from Samsung and LG had hurt domestic manufacturers. The public hearing on possible remedies with respect to the safeguard is scheduled for Oct. 19.

When the safeguard restrictions are invoked, the US government may impose or increase tariffs on Korean firms and limit their imports to the US.

Samsung and LG’s washing machines made in Korea will be excluded from the restrictions under the rules of the Korea-US Free Trade Agreement. But the Korean firms will not benefit much from this rule, as most of their washing machines shipped to the US are made in overseas factories in Vietnam, Mexico and elsewhere.

Samsung and LG are currently building plants for their home appliances in the US.

In June, Samsung announced it would invest $380 million in building a new plant in South Carolina by 2020. In March, LG said it set aside $250 million to build a plant in Tennessee by 2019.

Asked whether the company’s plan to build the plant in the US was made due to rising protectionism including the ITC’s ongoing moves and US President Donald Trump’s “America First” policies, a Samsung official in Seoul said, “We didn’t consider those as the main factors, but the new plant is expected to help us avoid controversies in respect to (political) issues.”

For LG, building the factory in the US was a strategic decision as the US is its largest home appliance market, an official said.

In the face of the hearing, Samsung and LG are to meet on Oct. 11 with the foreign and trade ministries to discuss how to minimize the potential damage. The tech firms are to join the hearing to appeal to the US government.

During the hearing, Samsung and LG will reportedly highlight there are no grounds that Whirlpool was damaged because of the Korean firms and the restrictions would only lead to losses for US consumers.

On the day when the ITC ruled in favor of Whirlpool, Samsung said on its US company website, “Restrictions on imports of Samsung washing machines will negatively affect American consumers by limiting choices, raising prices and offering less innovative washing machines.”

LG’s spokesperson said on the same day, “LG washing machines have grown on the back of the US distributors and consumers. We will actively explain during the hearing that Whirlpool was not damaged and the safeguard restrictions will eventually lead to damage for US consumers.”