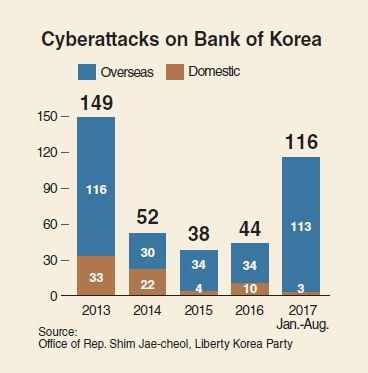 There have been nearly 400 cases of cyberattacks against South Korea’s central bank over the past four years, some of which are suspected to have come from North Korea, a report by Rep. Shim Jae-chul of the Liberty Korea Party showed Tuesday.

A total of 399 cases of cyberattacks were made against the Bank of Korea from 2013 to August this year. The majority, or 273 cases, were hacking attempts. Eighty-two percent of the total were conducted from a foreign country.

A government official was quoted as saying that North Korea had also made several attempts, although no specific number was revealed in the report.