Kim has focused on strengthening teamwork and developing delicious food in a bid to make inroads in the food and beverages industry.

Stressing the role of the Manimal team, Kim said his business itself is small, but it’s been selected by Forbes thanks to the interesting story behind his business and the company’s philosophy. 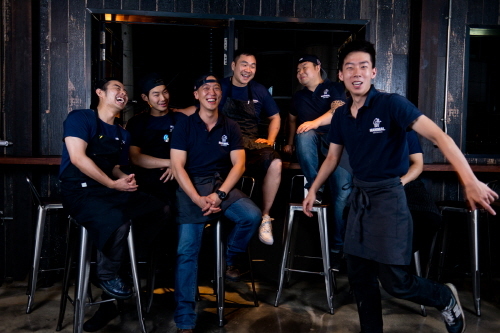 Kim graduated from Glion Institute of Higher Education in Switzerland, a hospitality school, and completed training sessions at JW Marriott Hotel in Seoul. He dreamed of his own business and worked at various part-time jobs including a coffee shop and a chicken restaurant. During that time, Kim felt frustrated that F&B industry jobs were not respected enough and often involved poor working conditions. Kim wanted to bring positive changes to the F&B industry, and he views such changes as one of his most important missions in the business.

Before Manimal was founded, Kim received good responses on his rooftop barbecues with his friends. The feedback inspired him to start a pop-up store with his friends while doing a catering business. Afterwards, he attracted investors for a full-fledged business.

But searching for investors was no easy task. Kim wrote many letters to potential investors and met with more than 30 of them to explain his plans. His writing experience at GIHE proved useful in his endeavor. In preparation for the business’s launch, Kim utilized the practical knowledge he learned at the school.

“Manimal has no plan to open up 100 or 200 stores. The vision and mission of the team is to build a better team and promote the culture of the F&B industry. That’s why our team has now become the benchmark for others,” Kim said. ”We want to challenge ourselves with food and services through new brands, rather than expanding our business with the same brand.”

Manimal has launched BBQ specialty brands Manimal Smokehouse and Manimal Provisions, as well as Detroit pizza brand Motor City. It is now planning to expand its business by launching seven new brands by 2019 and also preparing to advance into overseas markets.