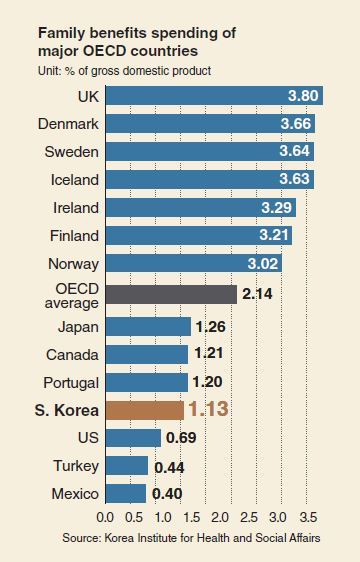 Although the South Korean government has poured in some 100 trillion won ($88.4 billion)

88,449,000,000) over the past 10 years to solve the low birthrate issue, the country’s spending on family benefits still remained among the lowest of the members of the Organization for Economic Cooperation and Development.

The Korea Institute for Health and Social Affairs said in a recent report that the country’s family benefits spending as a percentage of gross domestic product reached 1.13 percent, ranking 32nd out of 35 OECD member countries.

Family benefits spending refers to various monetary and service benefits for child care and child care leave. It shows how active a state is involved in issues related to having children and raising them.