Speaking at a forum held by the Korea Automobile Manufacturers Association on Aug. 21, Park said, “The situation seems to be more difficult than when we were suffering from the Asian financial crisis.” He was referring to the late 1990s when the East Asian miracle became a financial nightmare.

Major concerns include the continued drop in sales in and out of the country as well as a legal battle over workers’ request to recognize bonuses as part of their ordinary pay.

Rising labor costs are a major threat to carmakers here, as they make them less capable of investing in research and development, automakers claimed. Without resolving the labor issue, the industry has no future, they added.

On Thursday, Kia got the verdict from a local court to pay 422.3 billion won ($375.5 million) in compensation, as it ruled bonuses and meal allowances should be paid to workers as part of “ordinary wages.”

Kia is to appeal the case, as it claims the ruling would force the carmaker to provide additional overdue payments for the nine-year period between 2008 to 2017. The ruling only covers three years of unpaid wages between 2008 and 2011. If so, it is estimated to cost the carmaker around 1 trillion won.

“What worries me more is the payment that could be added in the future, not the compensation,” Park had said, adding that the carmaker may have to pay 50 percent more for overtime allowances from now on. The carmaker also fears that the ruling would encourage a similar move by workers at Hyundai Motor and cause a “domino effect” in the entire industry, which suffers from high labor costs and low productivity.

According to Korea Automobile Manufacturers Association, workers at five automakers in South Korea were paid an annual wage of 91.2 million won on average, higher than workers at Toyota and Volkswagen, the two biggest carmakers in the world.

The tough labor market conditions have also stoked speculations that companies might pull out from the industry here. For instance, rumors that GM Korea might withdraw from Korea have long been circulating.

Though the US automaker has denied the rumors, the Korean market seems to be less attractive than before for foreign investors.

Not only rising labor costs, but also the weakening compact car market worldwide has been hurting GM’s performance here, according to industry insiders. Korea was GM’s manufacturing hub for compact cars and sedans.
The auto industry has been one of the major industries leading South Korea’s economic growth, which depends heavily on exports.

After reaching its peak in 2012 with outbound shipments of 3.17 million vehicles that year, the number of exports of made-in-Korea vehicles declined to 2.62 million last year, dragging Korea down from the world’s third-largest car exporter in 2015 to the fifth largest in 2016. 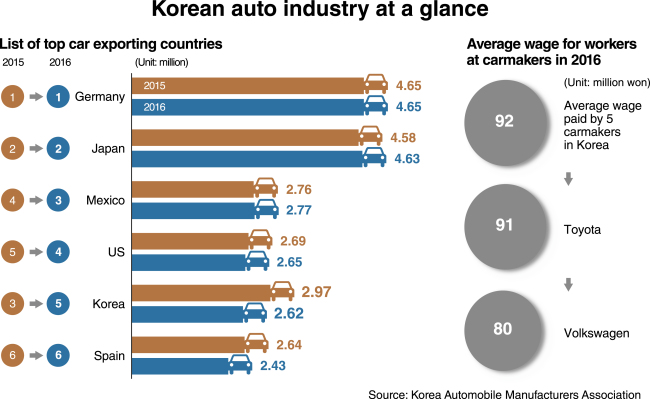 Among major issues troubling the industry are the ongoing labor disputes, Beijing’s apparent economic retaliation against Korea over the deployment of a US anti-missile system here, and emerging protectionism around the world.

But there are also fundamental problems that have been left unaddressed for years, experts say.

One of them is the parent-subsidiary structure that has helped major carmakers like Hyundai and Kia reduce production costs.

In the fast-evolving market, such a structure hinders the flexibility of the companies, making them more vulnerable to changes, say experts.

“Due to a change in motorists’ preferences and the business landscape, price competitiveness is no longer the key to securing the top spot in the auto industry,” said Kwon Soon-wu, an analyst covering the auto sector at SK Securities. “Carmakers have to either use the best auto parts or the most suitable ones through open sourcing,” said Kwon.

Hyundai and Kia are still dominant players here, as they have a combined 70 percent of the market.

GM Korea is the third largest with 7.2 percent, followed by SsangYong and Renault Samsung with 5.8 percent and 5.3 percent, respectively. The remaining 11.8 percent is taken up by imported cars, according to KAMA’s July data.

However, Hyundai and Kia, though strong in the sedan segment, did not see the worldwide popularity of sport utility vehicles coming.

And it was a big miss. The global market for small SUVs has posted years of rapid growth since 2012, according to data compiled by industry tracker IHS Markit.

“The growing demand for SUVs is related to the oil price that fell considerably from past years. The management at Korean automakers failed to see that coming and are a step behind releasing new models,” said Kim Bum-joon, a researcher at LG Economic Research Institute.

Kim Pil-soo, a professor at Daelim University, also believes that the passive decision-making process of Korean automakers stems from the nature of chaebol management -- in which a member of the owner family exercises the ultimate power.

“This extremely hierarchical system at Hyundai Motor makes it difficult for the carmaker to be cross-checked in terms of its quality and also to devise creative future strategies,” he said, stressing that Hyundai is the only family-run business among top global carmakers.

“In order to transform itself from a fast follower to a fast mover, Hyundai should be open to many ideas. ... Being controlled under the leadership of a charismatic owner may be less valid.”

The carmaker has also been relatively less active in seeking partnership with global IT companies that are moving to create new markets for electric vehicles and driverless cars.

“The prolonged parent-subsidiary structure has blinded local carmakers from catching the latest trends. They also overlooked the emergence of IT companies and Silicon Valley startups entering the auto market,” Kwon of SK Securities noted.

US-based auto giant Ford was named the leading company in automated driving, showing a jump from the fifth spot in 2015 due to investments on key auto parts and IT companies, the acquisition of the shuttle service Chariot and a newly implemented business model, the report added.

As a late comer to self-driving systems, Hyundai Motor recently stepped up efforts to catch up with competitors, following the consumer electronics show this January.

In February, the company expanded its division for self-driving systems, called the Intelligent Safety Technology Center, to mass produce high level self-driving cars by 2020 and commercialize fully autonomous vehicles by 2030.

Doctor Lee Jin-woo, who had led the development of automated cars at GM, was hired as head of the center.

The plummeting sales of Hyundai Motor and Kia Motors, which recorded a decline for four quarters in a row, have taken a toll on their affiliates such as auto parts supplier Hyundai Mobis, steelmaker Hyundai Steel, logistics company Hyundai Glovis and auto parts maker Hyundai Wia.

Hyundai’s decline also affected the overall performance of its affiliates. The operating profit of Hyundai Mobis -- where 70 percent of the company’s sales are generated from business with Hyundai affiliates -- dipped 22.8 percent on-year between April and June this year, the company said.

The ambiguous identity of Korean cars are also problem. They are not as cheap as they were before. They are also not leaders in terms of technology and design.

“They are not on an equal level with Japanese automakers in terms of technical skills, while Chinese carmakers are quickly absorbing technological knowhow based on a 50:50 joint venture system with foreign carmakers.”

By The Korea Herald Auto Team