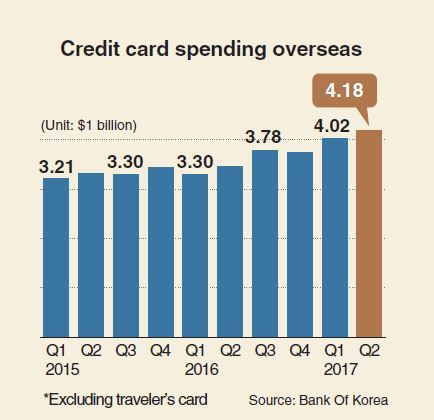 South Koreans’ use of cards overseas hit a record high in the second quarter of this year amounting to $4.18 billion, up 20.6 percent from a year earlier, according to the Bank of Korea on Thursday. It marked a 4 percent increase from the preceding quarter.

Some 6.11 million South Koreans traveled abroad in the second quarter, according to government data, down from 6.51 million from January through March.

In comparison, card spending by foreign visitors here reached $1.87 billion in the same quarter, down 23.6 percent from the first quarter.