Looking ahead to 2030, the country is expected to continue to change rapidly, facing many difficult challenges -- some familiar but others unprecedented.

The biggest of all will be those brought on by an aging population, something unimagined only a few decades ago. 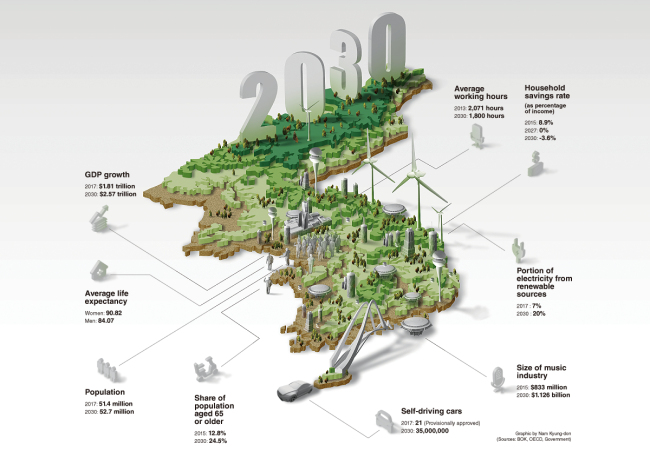 The process, observed in many industrialized nations, is accelerated here by the rapidly increasing life expectancy coupled with one of the world’s lowest birthrates.

The increase in life expectancy will be a mixed blessing for a rapidly aging nation. According to the Bank of Korea’s projections, South Korea will be a super aged society in 2030, with 24.5 percent of the population being over the age of 65.

The year 2030 will also see the country’s arrive at a demographic cliff, when the population begins to shrink. According to projections, South Korea’s population will peak in 2031 at 52.96 million million, only 1.3 million larger than the current population of 51.4 million. From there on, the number of South Koreans will begin to decrease quickly, falling nearly 2 million by 2045. The drop will also reduce the economically active populations, dragging down with it the country’s economy.

The changes projected to take place here are not all bleak.

Despite the perennial talk of economic slowdown, the country’s gross domestic product is projected to reach $2.57 trillion by 2030, growing by more than 40 percent from the $1.81 trillion projected for 2017. The average Korean will also spend less time at work each year in 2030. On average, Koreans spend nearly a quarter of the year working, or 2,071 hours, but the figure is expected to drop to 1,800 hours by 2030.

If the Moon Jae-in administration’s plans work out, the country will also have become much greener, generating about a fifth of its electricity from renewable sources.

Will there be a lasting peace on the Korean Peninsula in 2030? That seems to be the hardest to predict right now, with threats of a war with North Korea reaching a new level.