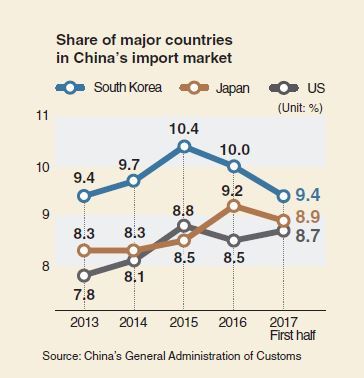 South Korean goods are losing their presence in one of their largest overseas market, China, with the products taking up 9.4 percent of China’s import market in the first half of the year, the lowest since 2014, data from the Korea International Trade Association showed.

The proportion was 10.4 percent and 10 percent in 2015 and 2016, respectively, until South Korean exporters were hit by Beijing’s alleged economic retaliation, such as boycotts and stronger regulatory inspections, upon Seoul’s hosting of a controversial US missile defense system on the peninsula.

The data also showed that Korean goods in China’s import market managed 9.3 percent growth in the first half of the year, while other countries expanded by up to 60 percent.