Actress still not comfortable with being called a ‘lead,’ but she may have more such roles coming her way

That role in the 2016 hit series “Descendants of the Sun” made Kim one of the most promising actresses on Korean television. Her portrayal of the tenacious but vulnerable Lt. Yoon Myung-joo made a deep impression: Many viewers confessed they watched the drama to support the love story between Yoon and Sgt. Seo Dae-young, played by Jin Goo.

Recently, Kim achieved an almost complete transformation in KBS’ “Fight My Way,” which ended on July 11.

“The biggest thing I’ve taken away from (the series) is that I was able to show a different side of myself,” Kim told The Korea Herald in an interview Friday at the Seoul headquarters of King Kong Entertainment. “Before, people thought of me as smart and somewhat unapproachable.”


In the romantic comedy, Kim plays Ae-ra, the archetypal girl-next-door who lives in the same building as her childhood crush-turned-friend Dong-man, played by Park Seo-joon. On a daily basis, Ae-ra stomps into Dong-man’s home unannounced and without bathing, and watches TV with him at night while digging into a box of fried chicken.

Kim described her recent character as brave, honest, fearless and easily hurt, but able to pick herself up.

“I’m not as outspoken as she is, so it was a huge release playing her.”

The series became a hit for its credible portrayal of struggling Korean youths. The story was relatable to the 24-year-old actress, who had only recently come into the spotlight.

“The scenes where Ae-ra is interviewing for jobs -- I could really relate to them.” In the show, Ae-ra’s dream of becoming a news announcer is foiled due to her less-than-elite education and lack of extracurricular activities. She ends up working at an information desk in a department store.

“Only a little while ago I was living a similar life. Even now, it may seem different because of my job, which appears glamorous, but I don’t think it’s that different.” 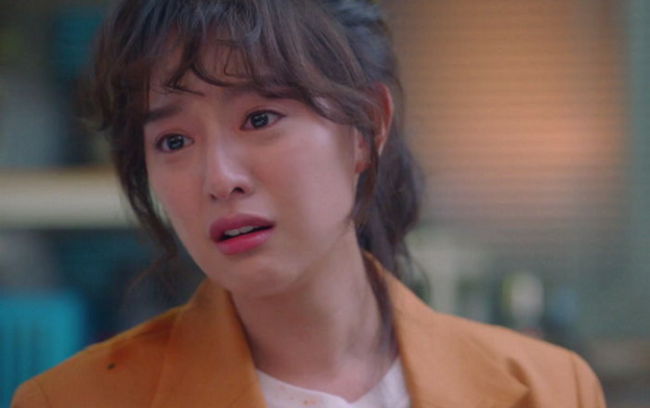 "Fight My Way" (KBS)
A graduate of Dongguk University, Kim fell into acting after being cast in commercials in middle school. After starring as a haughty heiress in the 2013 drama “The Heirs,” Kim made cameo appearances and took on supporting roles until the explosive success of “Descendants.” Not getting called back for auditions still feels more familiar to her, she said.

“I feel hungrier the more I act,” Kim said. “I look back on my performances and all I can see are things I could’ve done differently, parts to improve.”

In a way, it can be said that Kim portrays the typical downtrodden-but-feisty K-drama heroine in “Fight My Way.” But as her co-star Park Seo-joon said in a recent interview, there’s “a certain quality” that Kim brings to the role, making her loveable and relatable.

Kim’s next project is both her first period piece and film -- the third installation of the “Detective K” series by director Kim Seok-yoon.

The actress says she is both nervous and excited to show yet another side of herself. “I’m going to be spending a lot of time preparing, especially the tone of speech in period pieces.”

The Korea Herald is introducing Korean singers, musicians and actors poised to join the next wave of top stars in a twice monthly series. -- Ed.