Amid growing demand for the lithium-ion batteries that power electric vehicles and smartphones, cobalt, the key energy metal, has seen a decline in production this year driven mainly by the unstable political situation of the Democratic Republic of Congo, which accounts for more than half of global cobalt production.

In July, the price of cobalt came to $61,000 per ton, a 90 percent jump from early in the year, according to industry data.

The continued political instability of Congo and rising demand for electric vehicles will lead to a supply shortage of cobalt from 2018, which will last for four straight years, Macquarie Research predicted. The global EV market is forecast to grow from 6.7 million units in 2015 to 10.4 million units by 2020, according to Japanese market research firm B3. 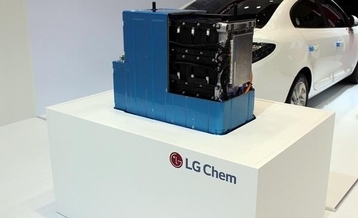 Leading Korean battery makers Samsung SDI, LG Chem and SK Innovation -- whose combined EV battery sales stand at around 20 percent of total global sales -- are responding to the short supply by developing new batteries that can reduce the use of cobalt.

“We are developing a new lithium-ion battery with a reduced portion of cobalt in response to the price rise of the energy metal,” said Kang Chang-beom, an executive of LG Chem’s battery business strategy division, on a conference call with analysts on July 19.

Current lithium-ion batteries are comprised of cathode material, anode material, electrolytes and separators. The cathode material includes nickel, cobalt and manganese, whose proportion is currently at a 6:2:2 ratio. But the three firms are developing new batteries to change the ratio to 8:1:1.

Improving the proportion of nickel could allow EVs to run farther on a single charge.

“The new batteries with the reduced portion of cobalt could be developed in three to four years, although it would be difficult to get rid of cobalt completely anytime soon,” said a source from LG Chem.

Alongside the development of new batteries, the battery makers are also diversifying their cathode material suppliers.

“The price surge of cobalt has become a very sensitive issue recently. We are trying to diversify our cathode material suppliers and to make a long-term contract (in order not to be affected by short-term political instability) with them,” a Samsung SDI official said.

Currently, both Samsung and LG are provided with cobalt from several cathode material providers, including local firm Ecopro and Belgian firm Umicore.

Some industry watchers have said the government should move to secure the necessary metals at a national level to support local battery firms.

However, the government is not in a position to do so, as most public projects that tap on overseas resources, which began under former President Lee Myung-bak in around 2010, have come under fire for lacking in meaningful contributions.

In June, the government announced a massive restructuring plan of public organizations, including Korea Resources Corp., and said there would be no more new investments in overseas resources.

“We agree that there is the necessity to exploit cobalt for the private sector. But we have no plan to make any new investments in overseas resources, as the tax burden caused by past failures is too massive,” said Kim Doo-yeol, an official in charge of developing overseas resources at the Ministry of Commerce Industry and Energy.