Japan called Monday for increased pressure on North Korea, saying this is not a time for dialogue.

The test marked a significant step toward the goal of North Korea's young leader Kim Jong Un to develop a missile with a nuclear warhead capable of reaching the United States. The ICBM reportedly landed in Japan's exclusive economic zone in the Sea of Japan, where previous North Korean ballistic missile launches have also landed. 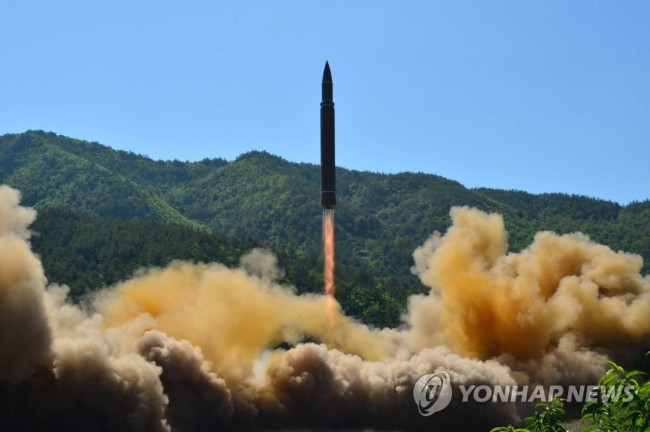 Despite condemning the ICBM test, South Korean President Moon Jae-in on Monday offered talks with North Korea, indicating for the first time since his inauguration in May that he wants to use dialogue to defuse the international standoff over the North's nuclear and missile programs.

Maruyama said the Japanese government is “aware of the announcement,” but made clear that immediate talks aren't the approach it supports.

“This is not a time for dialogue, it's a time for pressure,” he said.

Maruyama explained that raising pressure now is essential “in order to be able to conduct a serious dialogue” with North Korea in the future.

“Dialogue for the sake of dialogue is meaningless,” he stressed.

He reminded Seoul of the joint statement issued by Moon, US President Donald Trump and Japanese Prime Minister Shinzo Abe after a meeting on the fringes of the G20 summit in Hamburg, Germany, on July 6 on a “common understanding” on how to deal with North Korea.

The joint statement commits the three leaders to work together to counter the threat from North Korea and “to apply maximum pressure” on Pyongyang “to change its path, refrain from provocative and threatening actions, and take steps necessary to return to serious denuclearization dialogue.”

The three leaders also agreed to press for early adoption of a new UN sanctions resolution to demonstrate to North Korea that “there are serious consequences for its destabilizing, provocative and escalatory actions.”

In response to the ICBM test, the United States has circulated a resolution with proposed new sanctions to the other permanent veto-wielding Security Council members _ China, Russia, Britain and France _ UN diplomats said last week.

No details have been released. But US Ambassador Nikki Haley told the council earlier this month that if it is united, the international community can cut off major sources of hard currency to North Korea, restrict oil to its military and weapons programs, increase air and maritime restrictions, and hold senior officials accountable.

When pressed about possible restrictions on oil sales, Maruyama said, “we are considering” tougher UN sanctions. But he also stressed that, “we need to see what sanctions are most successful.”

He urged all countries to implement UN sanctions, and called on other nations to follow Japan's move to bar North Korean ships from Japanese ports and impose additional sanctions.

What is important, Maruyama stressed, is to stop the flow of people, commodities and currency to North Korea.

China, North Korea's neighbor and closest ally, is responsible for 90 percent of trade with the country.

Maruyama said Japan is encouraging China to play “a greater role” in pressuring North Korea to halt its provocative actions and comply with Security Council resolutions.

He said Russia also has “an extremely important role to play in dealing with the North Korean problem and we will encourage Russia to play some even greater role.” (AP)