The benchmark Korea Composite Stock Price Index climbed 0.42 percent to finish at a fresh high of 2,388.66 on Monday, while the key index of the minor KOSDAQ market fell 0.09 percent to 668.36. 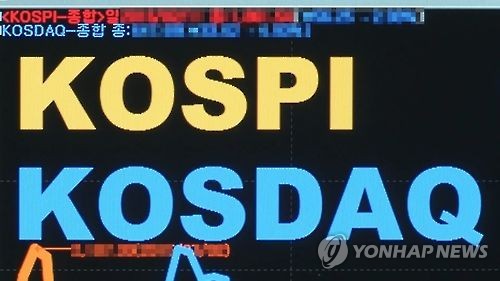 The difference between the price indexes reached an all-time high of 1,720.30, surpassing the previous record set on June 2, which was also a six-year high.

Analysts attributed the big gap to the main stock market's streaking run that contrasts with the lackluster performance of the tech-heavy secondary bourse.

Buoyed by expectations for improvements in major companies earnings down the road, the main bourse has been on a roll in recent months, renewing record highs several times.

In contrast, the KOSDAQ index has been languishing below the 700-point level since August last year amid weak investor interest in tech startups.

Market watchers predicted the performance gap to widen further for the time being as top-cap Samsung Electronics Co. and other large caps are powering the bull run of the main board.

Their bullish run has been driven by improved earnings in the first quarter of the year, which are widely expected to continue in the second quarter.

"Major companies are now armed with the ability to turn a profit despite considerable political shocks and low economic growth," said Kim Seong-bong, a senior analyst at Samsung Securities Co. "That is the main reason why market watchers paint a rosy picture of the major bourse for the second half and thereafter."

The KOSDAQ market, however, is projected to remain range-bound for the time being as it hosts small and mid-cap companies, which are focused principally on the domestic market. Watchers said such firms may find it difficult to see improved earnings despite the government's push to spur domestic demand and signs of a recovery in consumer spending. (Yonhap)