Bank of Korea announced the current account balance had continued a surplus for 62 consecutive months, but the growth in exports was offset by higher dividend payouts to foreigner investors, surging oil prices and other factors, which contributed to the current account surplus decreasing dramatically. 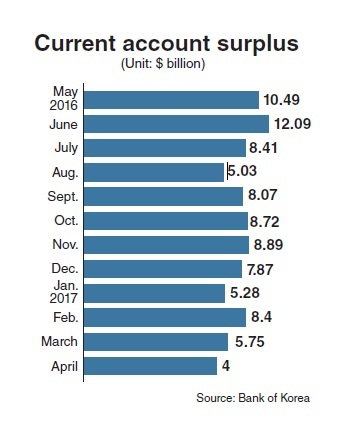 Exports, on the other hand, grew by 19.2 percent in April to $48.2 billion, up for six consecutive months.

By sector, merchandise accounted for $11.93 billion, logging the biggest surplus in 10 months since June last year.

Based on an analysis of the business settlement reports of 345 companies -- excluding non-manufacturing companies such as finance, transportation and telecommunications -- their export volume reached 431.5 trillion won ($386 billion) last year, a 2.53 percent decline from the previous year.

Their overall revenue including exports and domestic sales also decreased by 1.29 percent.

Pharmaceuticals showed the largest plunge by 20.87 percent, followed by nonmetals by 14.25 percent, machineries by 10.23 percent and transportation tools by 5.97 percent.

On the other hand, steel logged a rise in exports by 24.38 percent, followed by food and beverages at 21.76 percent.

The country’s exports were again dominated by the top 10 listed companies, which made up 80.64 percent.

While the top 10 companies’ export volume declined by 2.49 percent, their proportion of the country’s total exports surged 0.03 percentage point from 80.61 percent in 2015.