The 1.1 percent quarterly growth was the fastest in six quarters, driven mainly by the private sector, not the government, a BOK official said.

“The growth was led by construction, facility investment and exports in the private sector. The quality of economic growth seems to have improved because it was not government-led,” said Kim Young-tai, director of the BOK’s national account division, at a press conference.

“The first-quarter result is expected to positively affect the annual growth rate as well.”

BOK Gov. Lee Ju-yeol recently said he expected the nation’s annual growth to be higher than 2.6 percent this year. 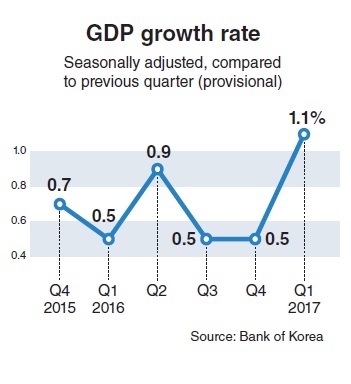 Exports grew 2.1 percent on-quarter, revised up by 0.2 percentage point, with continued strong shipments of semiconductors, as well as improved machinery and equipment, the BOK data showed.

Private consumption increased to 0.4 percent in the first quarter compared to the previous quarter when the corresponding figure was 0.2 percent. But the figure is relatively weak compared to 0.8 percent growth and 0.6 percent growth in the second and third quarter of last year, respectively.

“Compared to GDP growth, recovery in private consumption is relatively weak. But a recent rise in consumer sentiment indicates that it will recover soon,” Kim said.

Experts said it was too early to judge whether the Korean economy is on the path to full recovery.

Sung Tae-yoon, an economics professor at Yonsei University, said even if the BOK lifts up its annual growth forecast to the upper 2 percent level, it would be still below 3 percent. Korea’s economic growth rate has been in the 2 percent range since 2012, except for the 3.3 percent expansion in 2014.

“It is more appropriate to say that a downward trend has stopped, rather than the economy is recovering.

As domestic demand is still sluggish, the government should use an extra budget in areas that would directly help recover domestic demand,” Sung said.

President Moon Jae-in is pushing to secure a 10 trillion won ($8.93 billion) supplementary budget for jobs, but this is facing strong resistance from all of the opposition parties -- Liberty Korea Party, People’s Party and Bareun Party.