By Ock Hyun-ju
Published : May 31, 2017 - 16:11       Updated : Jun 1, 2017 - 16:01
Chung Yoo-ra, who has enjoyed a wide range of privileges on the back of her once-influential mother Choi Soon-sil, returned to South Korea on Wednesday to face questioning about the corruption scandal involving her mother and ex-President Park Geun-hye.

Eight months after she went into hiding in Europe to avoid the prosecution’s summons, Chung finally returned home in handcuffs and shifted all responsibility to her mother.

“I think I was wrongly accused. I don’t know what happened between my mother and former President Park Geun-hye,” she told reporters upon her arrival at Incheon Airport.

“I thought it would be better to come back to Korea and solve the misunderstanding as my baby was alone for too long,” said Chung, a single mother with a 23-month-old son.

She was immediately taken to the Seoul Central District Prosecutors’ Office to be questioned.

Chung was probably the biggest beneficiary of her mother’s alleged manipulation of power and extortion of donations from local firms.

She faces allegations that she was accepted into Ewha Womans University and received good grades despite poor attendance on the back of her mother’s ties to Park. Samsung Group was a sponsor paying for her expensive equestrian training abroad. 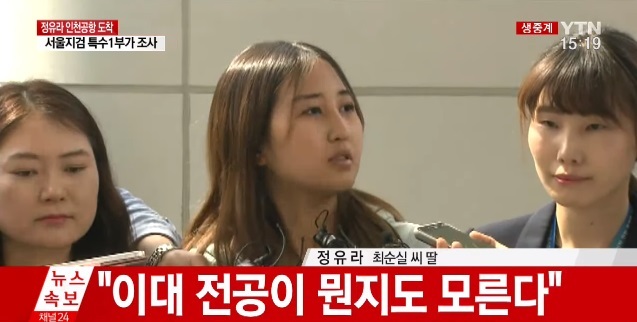 "I don't even know what my major was at Ewha Womans University" (YTN Capture)
“I was told I was one of the six people who were sponsored by Samsung Group, so I thought it was like that,” Chung said, adding she did not think it was special treatment.

Prosecutors believe Samsung’s de facto chief Lee Jae-yong, who is standing trial for allegedly offering bribes to Choi and Park, sponsored Choi’s family in exchange for Park’s backing of a 2015 merger between two Samsung affiliates, a key step to consolidate his control over the nation’s biggest conglomerate.

Her mother Choi is jailed and on trial on charges of colluding with former President Park to extort bribes and donations from local firms. Park, who was removed from office in March over the scandal, is also standing trial for the same charges. 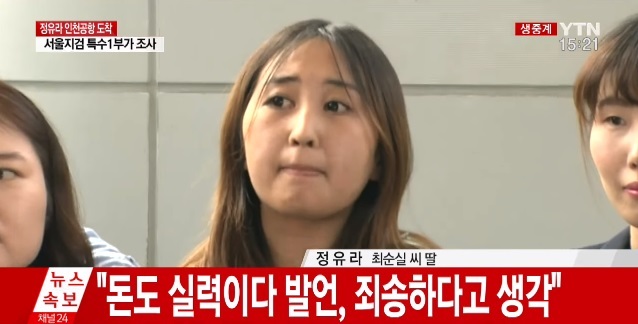 "I'm sorry for what I said regarding wealth being a part of a person's ability" (YTN Capture)
“I accept the cancellation of my admission into the school because I didn’t go to the school. I don’t even know what my major was. I never wanted to go to a university,” she said.

The prosecution Wednesday sought a seven-year jail term for Choi for her involvement in Chung’s admission into the elite school.

Chung has been in the custody of Danish authorities since January for illegal stay. As a Danish court accepted the South Korean prosecution’s request to extradite her to Korea, she had fought the decision in court, but withdrew the appeal earlier this month.

Now, the prosecution expects to expand its investigation into the corruption scandal by securing more testimony and evidence through Chung.

It can hold Chung for up to 48 hours in detention without a warrant. It is expected to request a formal arrest warrant for Chung on Thursday at the earliest.