It’s not because society has become more caring and does not produce them anymore.

“It is more that a serial of murders are prevented from the beginning. A murderer would be caught before they killed again,” said Kwon Il-yong, the nation’s first criminal profiler who recently retired.

But South Korea has in the past had some notorious serial killers. Kwon explained that these “monsters” were born from suppressed anger.

“Everybody reacts differently in a situation. A monster is born when a person’s genetic factors meet with a bad environment,” Kwon said. “Serial killers have a skewed self-regard and sense of superiority as they take people’s lives.”

The Korea Herald looked into some of the nation’s infamous serial killers.

Kim Dae-doo can be described as the nation’s first known serial killer. For 55 days from August to October in 1975, Kim murdered 17 citizens including elders and an infant. He was Korea’s most prolific serial killer until Yoo Young-chul broke the record it in 2004.

As an ex-convict, Kim came out of jail and tried to get a job but was “treated coldly.” His hostility toward society reached its peak and he killed random citizens, regardless of their gender and age.

“Everyone, even my family, treated me coldly after I was released from jail. I wanted to earn money just like the others,” he had confessed. “I killed adults because they would remember my face and a child because the crying sound was annoying.”

A laundryman reported him to the police after receiving Kim’s bloody jeans and upon his arrest, the then 26-year-old meekly admitted his crimes. During an on-the-spot inspection of the crime scene, he was seen smiling and chewing a gum.

Before he was executed in December 1976, he is said to have repented for his sins.

“I am regretful of my sins. I hope society changes to embrace ex-convicts.”

Yoo Young-chul murdered 20 people across Seoul from 2003 to 2004 and said after being caught that he would have killed a hundred more if he had not been nabbed.

His killing spree began when he broke into the house of a university professor to kill him and his wife in January 2003. Harboring enmity toward wealthy people, he planned his crime meticulously.

After being rejected by an escort girl, his targets switched from rich senior citizens to prostitutes and women. His hatred against women began after he was divorced in 2002. In a media interview after he was caught, he said he hoped the case would serve as a lesson to women and rich people.

“Women should not be sluts and the rich should know what they have done.”

As the police investigation expanded into a series of murders Yoo committed against the elderly, with most of them bludgeoned to death with a self-made hammer, he changed his killing method. Yoo was merciless and vicious in his demeanor, dismembering and mutilating the bodies. He also confessed that he ate the organs of his victims.

He received the death sentence in 2005 and is currently in jail. Korea has effectively abolished the death penalty as it has not proceeded with executions since 1997.

During sentencing, Yoo said he felt sorry for his victims, but would kill a hundred more if he was released.

While in jail he sent letters to a reporter who later published them. There, he confessed that the most fearsome moment was when his 4-year-old son made a phone call while he was mutilating a body.

“The scariest moment was not when a decapitated head fell off from a hanger or when a headless body came running to me. It was when my son called to ask if I still have a cold,” it read. 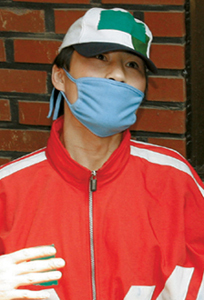 While many criminals come from deprived backgrounds, Jeong Nam-gyu was an outcast for a different reason. Jeong had confessed that he was molested by a man when he was 10 and was ostracized for most of his teen years.

From 2004 to April 2006, he killed 15 people and wounded 19. As if to take revenge, he first killed two elementary school boys after sexually assaulting them. Jeong had always hated rich men for having what he does not, he told the police then. His targets, however, were always those who were physically weaker than him -- minors and women.

He meticulously planned a “perfect crime” to not leave traces behind. Police explained that Jeong had run 10 kilometers every two days to develop physical strength and avoid being chased.

He mainly used a knife to kill people, but changed to blunt weapons out of fear that using a consistent method would help police catch him.

In his first attempt to kill an adult man in a house in 2006, he was caught as the victim and his father fought back.

During his trial, he testified that he was not sorry to the victims and that he was proud to have killed so many people.

“I am unlucky to have been arrested. If I had not be caught, I would kill more,” he said.

Jeong was sentenced to death in 2007 and hung himself in his cell two years later with a rope he made by tying plastic bags together. 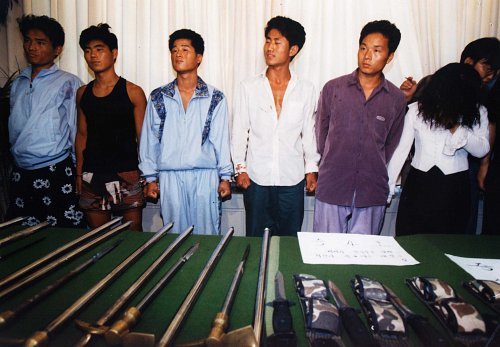 There was a crime group that systematically murdered people as well.

Their first target was a 23-year-old factory worker, who they raped and killed in 1994. They also set up a makeshift jail and incineration facility in a basement of the leader’s house in South Jeolla Province.

While it all started from their frustration against the rich and the economic polarization in society, their targeted victims were not always wealthy. One of the five people they killed was also one of their members, Song Bong-eun, who tried to secede from the group.

In September, 1994, they kidnapped four people and killed three of them in the most brutal ways. One victim, after being tortured, escaped to report the gang to the police. The six members were finally caught and were executed in November the same year.

In their testimony, one of the members revealed that they had practiced cannibalism, because they “gave up on being human.”